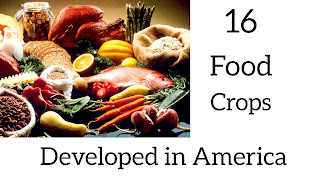 Christopher Columbus‘s “discovery” of the Americas in 1492 led to the introduction of many novel crops to Europe and subsequently to European colonies in Asia and Africa, forever changing the global food landscape. Although it was the European explorers and colonizers who transported foods from the New World to the Old, the native peoples who domesticated these plants over millennia have largely been overlooked by history. The following is a list of some of the domesticated crops we owe to the original peoples of the New World.

Avocados were possibly domesticated independently in Mexico and Central America between 4000 and 2800 BCE. They were of particular cultural significance to the Maya.

The exact origin of cacao (the source of chocolate) is debated, but it may have been domesticated in South America and then introduced to the Maya some 1,500 years ago.

Also known as manioc or yuca, cassava was likely domesticated 8,000–10,000 years ago in southern Brazil by ancient Amazonian peoples.

Chia was widely cultivated in pre-Columbian Mesoamerica and was an important food to Aztecs.

One of the most ancient crops of the New World, corn was domesticated by Olmec and Mayan peoples in Mexico some 10,000 years ago.

Although the domestication history of the papaya is unresolved, the fruits were cultivated and further developed by the Maya at least 4,000 years ago.

Peanuts are thought to have been first domesticated in ancient Bolivia.

Chili peppers were developed in Mesoamerica (probably in Mexico) at least 7,000 years ago.

The pineapple plant is native to southern Brazil and Paraguay, though the timing of its pre-Columbian domestication is uncertain

Potatoes are thought to have been independently domesticated several times and were largely cultivated by the Inca as early as 1,800 years ago.

Quinoa was independently domesticated multiple times throughout the Andean highlands some 3,000–5,000 years ago and was a staple crop to Inca, Aymara, and Quechua peoples, among others.

Multiple species of squash, including pumpkins, zucchinis, and hard-shelled gourds, were domesticated independently throughout the Americas and are some of the earliest American crops.

The sweet potato likely originated in tropical Central America, though the history of its domestication is uncertain.

The tomatillo is thought to have been first domesticated by the Aztecs in central Mexico about 800 BCE.

Tomatoes are thought to have originated in the Andean region, but their domestication history is unresolved