Apus the Bird of Paradise Constellation 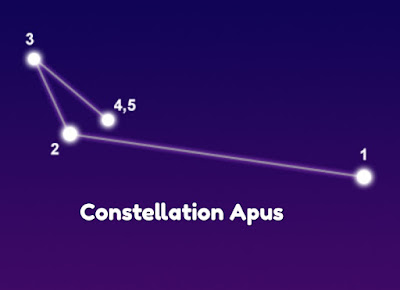 Apus was one of the dozen ( 12 ) new co onstellations introduced at the end of the 16th century from observations of the southern sky by the Dutch navigators Pieter Dirkszoon Keyser and Frederick de Houtman.
● Apus represents a fantastic bird of paradise a most beautiful bird, as found in New Guinea, but it is a disappointing tribute to such an exotic creature, its brightest stars being of only 4th magnitude.
● The name Apus comes from the Greek apous, meaning ‘footless’, since the birds were originally known to westerners only from dead specimens without feet or wings; these appendages had been removed by the locals, who prized the plumage for ornamental dress and traded the birds’ skins with neighbouring islands.
● The first examples were brought back to Europe by the survivors of Ferdinand Magellan’s round-the-world voyage in 1522, creating immense interest. For a while it was speculated that these gaudy birds were the mythical phoenix, which is perhaps why the Dutch explorers also invented a southern constellation called Phoenix.
An early misprint
● The constellation Apus was first shown on the 1598 celestial globe of Petrus Plancius as ‘Paradysvogel Apis Indica’. It seems likely that the word ‘apis’, meaning bee, was a misprint for ‘avis’, meaning bird, particularly since in that same year the Dutchman Jan van Linschoten had given the birds the Latin name Avis paradiseus.
● Johann Bayer also called the constellation Apis Indica on his Uranometria atlas of 1603, where it is depicted without wings or feet, doubtless modelled on a dead specimen.
● Others, In 1627 Johannes Kepler in the Rudolphine Tables , called it ‘Apus, Avis Indica’ (Apus, bird of India), correcting the apparent misprint, but the alternative usages of Apis and Avis continued to Bode’s day.
● Part of the bird’s tail was docked by Lacaille in the 1750s to form his south polar constellation Octans, an unfortunate truncation given that in real life the long, colourful tail feathers are the bird’s main attraction. Apus has no named stars, nor are there any legends associated with it.