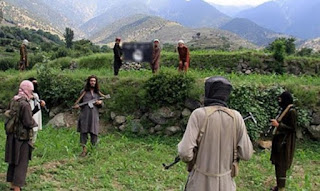 A British-Asian gang of fraudsters may have been involved in misusing billions of pounds of British taxpayers’ money to fund terrorist networks in Pakistan and Afghanistan, claims a U.K. media investigation based on police and intelligence files.

The gang is alleged to have sent 1% of its gains from its elaborate tax fraud to al-Qaeda in Pakistan and Afghanistan, where it funded madrasas, training camps and other terrorist activities, according to the leaked files seen by The Sunday Times.

An estimated £80 million is believed to have been funnelled out by the fraudsters as part of an elaborate VAT and benefits fraud against the U.K.’s revenue department over the past two decades, with further gains made through mortgage and credit card fraud.

Secret intelligence held by MIS states that some of the money reached the Pakistani compound that housed the AL Qaeda mastermind Osama bin Laden.