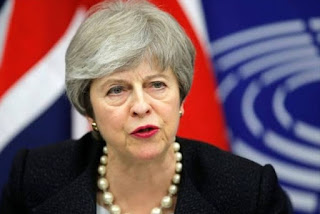 Brexit could be reversed if lawmakers reject the government’s exit deal, British Foreign Minister Jeremy Hunt said on Sunday after two major eurosceptic factions in Parliament warned that Prime Minister Theresa May was facing a heavy defeat.
Just 19 days before the United Kingdom is due to leave the EU on March 29, Ms. May is scrambling – so far unsuccessfully -to secure last-minute changes to an EU exit treaty before Parliament votes on Tuesday on whether to approve the deal.
If she fails, lawmakers are expected to force Ms. May to seek a delay to Brexit which some say could see the 2016
decision to leave the bloc reversed. Others argue that, without a delay, Britain faces an economic shock if it leaves without a deal. “We have an opportunity now to leave on March 29 or shortly thereafter and it’s important we grasp that opportunity because there is wind in the sails of people trying to stop Brexit,” Mr. Hunt told the BBC. “We are in very perilous waters.”

The Opposition Labour Party’s Brexit spokesman, Keir Starmer, said his party should support staying in the EU if there was a second referendum. However, he said the party would not be seeking to secure support in Parliament for a second referendum on Tuesday.
The Sunday Times said Ms. May was battling to save her job as aides were considering persuading her to offer to resign in a bid to get the deal approved. The newspaper also said Cabinet Ministers had spoken about whether to insist she goes as early as this week.