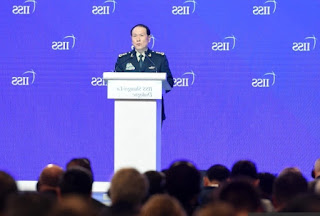 Defence Minister says the country has enjoyed stability and development due to the govt.’s action

China on Sunday defended the  bloody Tiananmen crack down on student protesters in a rare public acknowledgement of the event, days before its 30th anniversary, saying it was the “correct” policy. After seven weeks of protests by students and workers, soldiers and tanks chased and killed demonstrators and on lookers in the streets leading to Beijing’s Tiananmen Square on June 4, 1989. Hundreds, or possibly more than  1,000, were killed, although the precise number of deaths remainsunknown. “That incident was  a political turbulence and the central government took measures to stop the turbulence which is a correct policy,” Chinese Defence Minister General Wei Fenghe told a regional security forum in Singapore.  Gen. Wei asked why people still say that China “did not  handle  the incident properly”.  “The 30 years have proven that China  has under gone  major changes,” he said, adding that  because of the government’s action  at that time “China has enjoyed stability  and development”. Inside China, an  army of online censors haves crubbed  clean social media,removing articles, memes,hashtags or photos alludingto the Tiananmen crack down. Discussions of  the 1989 pro democracy protests and their brutal  suppression are strictly taboo, and  authorities have rounded up or warned  activists, lawyers and journalists  ahead of the anniversary each year.

WARNING TO U.S
In a wide ranging speech that  came  a day after acting U.S. Secretary of  Defense Patrick Shanahan addressed the same forum,  Gen. Wei vowed  that China  will not be bullied  by  the United States, issuing a  combative defence of its  policies  on Taiwan, the South China Sea and the restive  region of Xinjiang. China will  not renounce the use of force in the  reunification of self ruled Taiwan, he  said, calling it “very dangerous” to underestimate Beijing’s  will. “We will strive for the process of peaceful  reunification with utmost  sincerity  and greatest efforts  but  we make no promise to renounce the use of force,”  he said.