EVOLUTION AND GROWTH OF PUBLIC ADMINISTRATION 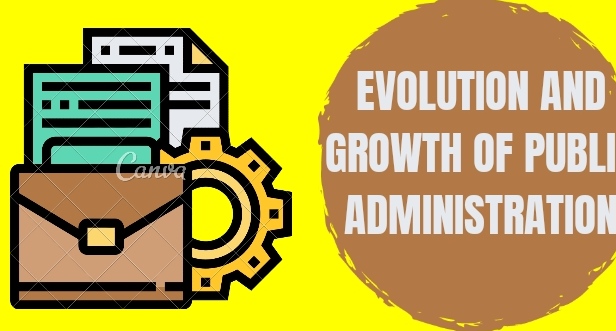 According to Robert T. Golembiewski, public administration has developed as an academic field through a succession of five overlapping paradigms.

As observed by Golembiewski the paradigm of public administration may be characterized and understood in terms of their locus and focus (Golembiewski 1977: 23)

For our convenience, we can broadly divide the evolution and growth of public Administration into the following six stages:

Let us understand in broad about each of the periods in the evolution of public administration.

Wilson hence writes, “that administration lies outside the proper sphere of politics. Administrative questions are not political questions. Although politics sets the task for administration, it should not be suffered to manipulate its offices.”

Hence, there should be a science of administration.

Another notable event of the period was the publication of Goodnow’s Politics and Administration in 1900 which endorsed the Wilsonian theme further by conceptually distinguishing the two functions.

According to Frank J. Goodnow, politics “has to do with the execution of these policies.” (Goodnow 1914:22)

In short, Goodnow posited the politics-administration dichotomy and he developed the Wilsonian theme further with greater courage and conviction.

At the beginning of the 20th century, American universities showed much interest in the public service movement. As a result, public administration received the first serious attention of scholars.

The American Political Association in its 1914 report stated that one of the concerns of political science was to train specialists for governmental positions.

In 1926, Leonard D. White wrote, Introduction to the Study of Public Administration, which was recognized as the first textbook on the subject. This book, while advocating a politics-administration dichotomy, stressed the human side of administration dealing comprehensively with the administration in government.

the second stage of evolution is marked by the tendency to evolve a value-free science of management. The central belief of this period was that there are certain ‘principles’ of administration and which is the task of scholars to discover and applied to increase the efficiency and economy of public administration.

This stage began with the publication of Willoughby’s Principles of Public Administration in 1927. He asserted that “in administration, there are certain fundamental principles of general application analogous to characterizing any science.” His main thesis is to apply the techniques of science to the solution of problems of organizing and administering with economy and efficiency.

Scientific management of the business of administration became a slogan. Administrative practitioners and business schools join hands to a mechanistic aspect of management. They claim that public administration is a science. The great depression in America contributed a lot to the development. keeping efficiency and economy as two basic values which the administration should attain, Gullick and Urwick tried to develop universal principles to achieve organizational goals, they coined the acronym ‘POSDCORB’ to promote seven principles of administration.

The main publication during the period from 1927 to 1937 was Willoughby’s ‘Principle of Public Administration’, Mary Parker Follet’s ‘Creative Experience’, Henry Fayol’s ‘Industrial and General Management’ Mooney and Reiley’s ‘Principles of Organization’ and Gullick and Urwick’s ‘Papers on Science of Administration’.

This period is often considered as the golden years of ‘principles’ in the history of public administration. This was also a period when public administration commanded a high degree of respectability and its product was in great demand both in government and business.

The main theme during this period was the advocacy of the ‘Human Relationship Behavioural Approach’ to the study of public administration.

The most notable contribution, in this period, came from the famous Hawthrone experiments carried out by a group of scholars at Hawthrone Plant of the Western Electric Company. The experiments clearly demonstrated the limitations of the scientific approach and, the powerful influence of social and psychological factors on the worker’s output.

This approach to organizational analysis drew attention to the effect of informal organization in the formal set-up of the phenomena of leadership and influence, and the impact of conflict and cooperation among groups in the organizational environment.

Chester Barnard also, in his work – Functions of the Executive in 1953 and Organisation and Management – stressed the psychological and behavioral factors in organizational analysis.

In 1954, Peter Drucker published his ‘Practice of Management’ in which he emphasized long-range planning and human relations in industry and government.

The mid-1940s theorists challenged Wilson and Gulick. The politics-administration dichotomy remained the center of criticism. In the 1960s and 1970s, the government itself came under fire as ineffective, inefficient, and largely a wasted effort. There was a call by citizens for efficient administration to replace ineffective, wasteful bureaucracy. Public administration would have to distance himself from politics to answer this call and remain effective.

It is appropriate to quote Mohit Bhattacharya here. He writes,

he brought in the perspective of logical positivism in the study of policy-making and the relation of means and ends. Reflecting the perspective and methodology of behaviouralism in psychology and social psychology, Administrative Behaviour pleaded for raising of scientific vigor in public administration.

In the 1960’s decade, two major developments took place in the history of public administration. These were:
1. Rise and Fall of Comparative Public Administration, and
2. Emergence of the concept of Development Administration.

The assertion of Robert Dahl has played a very important role in the development of the concept of comparative public administration. This conceptualization took a concrete shape in 1960 when the Comparative Administrative Group (CAG) was formed. Much of the development of this field depended upon the contributions made by Fred W. Riggs who chaired the CAG.

The concept of development administration also emerged as a sub-field of public administration in the 1950s and 1960s to carry out programs or projects to serve developmental objectives particularly to serve the needs of developing nations of Asia, Africa, and Latin America.

However, by the late 1960s, loopholes in the methodology of development administration became evident and this model was criticized both by the radicals and conservatives.

To quote Avasthi and Maheshwari,

By 1980 scholars like Ferrel Heady, Charles T. Goodsell, O.P Dwivedi, and others started the revival movement of comparative administration. This led to the widening of the scope of study of the subject.

Thus public administration that was reinvented in the form of New Public Administration in the early second half of the 20th century to achieve objectives of social justice, equality, relevance, and socio-economic progress was once again reassessed and reviewed in 1990 to incorporate features of New Public Management or we may say to establish ‘Entrepreneurial Government’ by focusing on efficiency, economy, and effectiveness. New Public Management (NPM) hinges on public choice theory and managerialism, a market economy, and private sector management.

Now Public Administration is advancing on two parallel ways. The First way continues to follow developments in the private sector and borrows from its ideas and methodologies that have been formed as a benchmark for improving the managerial and organizational tools in public systems.

The second way tries to preserve and strengthen social, civilian, and human aspects to give special concern to the welfare notion of the system of administration.

2 thoughts on “EVOLUTION AND GROWTH OF PUBLIC ADMINISTRATION”