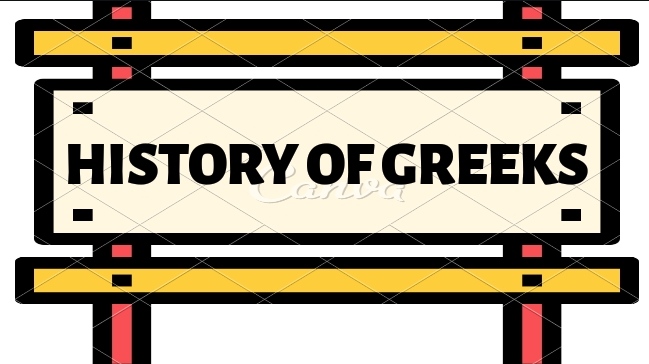 ● In this post, we are only Reading about Greek People
● In this reading, we understand the origin of the greek peoples at different times period.
The Greeks people’s history is so old and long. They belong to an ethnic group native to Greece, Cyprus, Italy, Turkey, Egypt and, southern Albania, as an extent, many other countries are surrounding the Mediterranean Sea. They also create a significant diaspora, with Greek communities established all around the world.
According to the history, Greek colonies and communities were established on the shores of the Mediterranean Sea and the Black Sea, but the Greek people have always been centered on the lonian and Agean seas, where the Greek language has been spoken since the Bronze Age.
Before the 20th century, Greeks were
distributed and divided between the Greek peninsula, the western coast of Asia Minor, the Black Sea coast, Cappadocia in central Anatolia, Egypt, the Balkans, Cyprus, and Constantinople the Many of these regions coincided to a large extent with the borders of the Byzantine Empire of the late 11th century and the Eastern Mediterranean areas of ancient Greek colonization.
There are several cultural centers of the Greeks which included Athens, Thessalonica, Alexandria, Smyrna, and Constantinople at various periods.
#Present
Nowadays Most ethnic Greeks live within
the borders area of the modern Greek state and Cyprus. The Greek population and genocide exchange between Greece and Turkey nearly ended the three millennia-old Greek presence in Asia Minor.
Other longstanding Greek populations can be found from southern Italy to the Caucasus and southern Russia and Ukraine and in the Greek diaspora communities in several other countries. Today, most Greeks are mostly influenced by the culture and Religion they officially registered himself as a member of the Greek Orthodox Church.
From the Ancient period, Greeks people have greatly influenced and contributed to culture, arts, exploration, literature, philosophy, politics, architecture, music, mathematics ie; Pythagoras, science and technology, business, cuisine, and sports, both historically and contemporarily.

Origin and History of the Greek peoples are revolving around the different periods at different civilizations, peoples were the same but outside invasion make his status of civilization. Greeks speak the Greek language which makes its unique branch with the Indo European family of language.

The Proto-Greek people probably arrived at the area now called Greece, in the southern tip of the Balkan peninsula, at the end of the 3rd millennium BC. The sequence of migrations into the Greek mainland during the 2nd millennium BC has to be reconstructed based on the ancient Greek dialects, as they presented themselves centuries later and are therefore subject to some uncertainties.

There had been at least migrations, the primary being the Ionians and Aeolians, which ended in Mycenaean Greece by means of the sixteenth century BC and the second one, the Dorian invasion, around the the eleventh century BC, displacing the Arcadocypriot dialects, which descended from the Mycenaean period. Both migrations arise at incisive periods, the Mycenaean at the transition to the late Bronze Age and the Doric at the Bronze Age fall apart.

An alternative speculation has been placed forth by linguist Vladimir Georgiev, who places Proto-Greek speakers in northwestern Greece through the Early Helladic period (3rd millennium BC), i.e. towards the end of the European Neolithic. Linguists Russell Gray and Quentin Atkinson in a 2003 paper used computational methods on Swadesh lists have arrived at a somewhat in advance estimate, around 5000 BC for Greco-Armenian split and the rise of Greek as a separate linguistic lineage around 4000 BC.

In 1600 BC, the Mycenaean Greeks borrowed from the Minoan civilization. They developed their syllabic script known as Linear B, providing the first and oldest written evidence of Greek. The Mycenaeans quickly penetrated the Aegean Sea and, by the fifteenth century BC, had reached Rhodes, Crete, Cyprus, and the shorelines of Asia Minor.

In 1200 BC, the Dorians, another Greek-speaking people, followed from Epirus.

Traditionally, historians have believed that the Dorian invasion caused the collapse of the Mycenaean civilization, however it’s far likely the primary attack was made by seafaring raiders (Sea Peoples) who sailed into the eastern Mediterranean sea around 1180 BC.

The Dorian invasion was followed by a poorly attested period of migrations, accurately called the period of Greek dark ages.

Mycenaean period as a wonderful era of heroes, closeness of the gods, and material wealth. The Homeric Epic i.e. Iliad and Odyssey were especially and generally accepted as part of the Greek past and it was not until the time of Euhemerism ( that scholars began to question Homer’s historicity). As part of the Mycenaean heritage that survived, the names of the gods and goddesses of Mycenaean Greece e.g. Zeus, Poseidon, and Hades.

In the 8th century BC ethnogenesis of the Greek nation is linked to the development of Pan-Hellenism.

According to a few scholars, the foundational event was the Olympic games which was held in 776 BC, In this game the idea of a common Hellenism among the Greek tribes was first translated into a shared cultural experience and Hellenism was primarily a matter of common culture and tradition.

The works of Homer and Hesiod were written in the 8th century BC, becoming the basis of the national religion, ethos, history, and mythology.

The Oracle of Apollo at Delphi was established in this period.

The classical period of Greek civilization covers a time spanning from the early 5th century BC to the death of Alexander the Great, in 323 BC (some authors prefer to split this period into “Classical”, from the end of the Greco-Persian Wars to the end of the Peloponnesian War, and “Fourth Century”, up to the death of Alexander). It is so named because it set the standards by which Greek civilization would be judged in later eras.

The Classical period is also described as the “Golden Age” of Greek civilization, and its art, philosophy, architecture, and literature would be instrumental in the formation and development of Western culture.

While the Greeks of the classical era understood themselves to belong to common Hellenic genes, their first loyalty was to their city and they saw nothing incongruous about warring, often brutally, with other Greek city-states.

The Peloponnesian War, the large scale civil war between the two most powerful Greek city-states Athens and Sparta and their allies, left both greatly weakened.

Alexander the Great, whose conquests led to the Hellenistic Age.

Most of the feuding Greek city-states were, in some scholars’ opinions, united under the banner of Philip’s and Alexander the Great’s Pan-Hellenic ideals, though others might generally opt, rather, for an explanation of “Macedonian conquest for the sake of conquest” or at least conquest for the sake of riches, glory, and power and view the “ideal” as useful propaganda directed towards the city-states.

Many Greeks settled in Hellenistic cities like Alexandria, Antioch, and Seleucia. Two thousand years later, there are still communities in Pakistan and Afghanistan, like the Kalash, who claim to be descended from Greek settlers.

Colonies established across the Mediterranean Sea and the Black Sea.

The defeat of the Persians and the emergence of the Delian League in Ionia, the Black Sea and Aegean perimeter culminates in the Athenian Empire and the Classical Age of Greece; ends with Athens defeat by Sparta at the close of the Peloponnesian War.

Rise of Theban power and defeat of the Spartans; Rise of Macedon; Campaign of Alexander the Great; Greek colonies established in newly founded cities of Ptolemaic Egypt and Asia.

Conquest of Greece by the Roman Empire. Migrations of Greeks to Rome.

Eastern Roman Empire. Migrations of Greeks throughout the Empire, mainly towards Constantinople.

Slavic conquest of several parts of Greece, Greek migrations to Southern Italy, Roman emperors capture main Slavic bodies and transfer them to Cappadocia. The Bosphorus is re-populated by Macedonian and Cypriot Greeks.

Roman dissolution of surviving Slavic settlements in Greece and full recovery of the Greek peninsula.

Retro-migrations of Greeks from all parts of the Empire (mainly from Southern Italy and Sicily) into parts of Greece that were depopulated by the Slavic Invasions (mainly western Peloponnesus and Thessaly).

Roman Empire dissolves, Constantinople was taken by the Fourth Crusade; becoming the capital of the Latin Empire. Liberated after a long struggle by the Empire of Nicaea, but fragments remain separated. Migrations between Asia Minor, Constantinople, and mainland Greece take place.