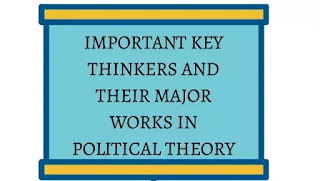 — Betty Friedan : Feminist Writer and Activists
● “The Famine Mystique”  (1963) contributed in Sparking Second Phase of Women Movement for Equality and broken private sphere into public sphere.
● Opposed Functionalism and Masculine Dominant Socitey.
●As a President of NOW ( National Organization for Women ) in 1966 , her aimed is to bring women into mainstream of American socitey now fully partnership with men.

— Rosa Luxemberg: Marxist Theorist, Economist, Philosopher, and Anti- War Activists.
● Major Work : “Articulation of Capitalism” (1913)
— “Social Reforms or Revolution” (1899)
— “The Mass Strike” (1999)
● She argued that capitalism needs to constantly expand into non-capitalist areas in order to access new supply sources, markets for surplus value and reservoirs of labor. According to Luxemburg, Marx had made an error in Das Kapital.
● She defended Karl Marx’s Dialectical Materialism and Conception of history.
● She said revolution and struggle is only way to remove Capitalism.
— George Lukas
● He was one of the most important Marxist thinker of his age.
● He belongs to “Western Marxism” or “Hegelian Marxism”
● Important Works:
History and Class Consciousness (1923)
The Historical Novel (1936)
The Meaning of Contemporary Realism (1958)
— Alasadir Machintyre
● His Major Work is “After Virtue” (1981)
— The Work is considered as key text of communitarianism
— He has influenced other communitarians as Michael Sandel and Michael Charles Taylor.
● Other Important Work :
“Whose Justice ? Whose Rationality ?”
— Ernest Mendel
● He Is a Marxist Economist and a Critique of Capitalism.
● His most famous work is : “Late Capitalism”
● He divides Capitalism into Three Phases >>>
1⃣ Competitive Capitalism : Capitalism Confined within domestic boundaries.
2⃣ The Era of Imperialism : Here Capitalist search for overseas markets in order to sell their Overproduction.

● His Other Works : The Second Slump (1978)
— Long Wave of Capitalist Devlopment