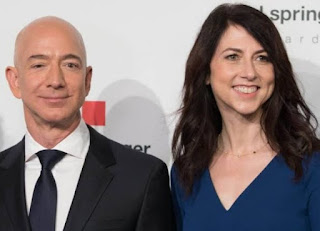 MacKenzie Bezos, wife of the world’s richest man jeff Bezos for 26 years, is set to walk away with a whopping $38 billion in the world’s biggest divorce settlement with the Amazon founder and CEO.

Ms. MacKenzie, 49, an author, will become the world’s fourth-richest woman, and has already promised to give away at least half of her fortune, CNN Business reported.
Ms. MacKenzie has said she had “a disproportionate amount of money to share” and promised to work hard at giving it away “until the safe is empty”.
The couple finalised their divorce in April, entitling Ms. MacKenzie to 25% of the couple’s joint Amazon stocks worth around $38 billion, the report said.
Even with the settlement, Mr. Bezos will be the richest individual in the world with an estimated net worth of $118 billion, according to the Bloomberg Billionaires Index.
Post Views: 9