Marxist Approach to the study of Nationalism in India 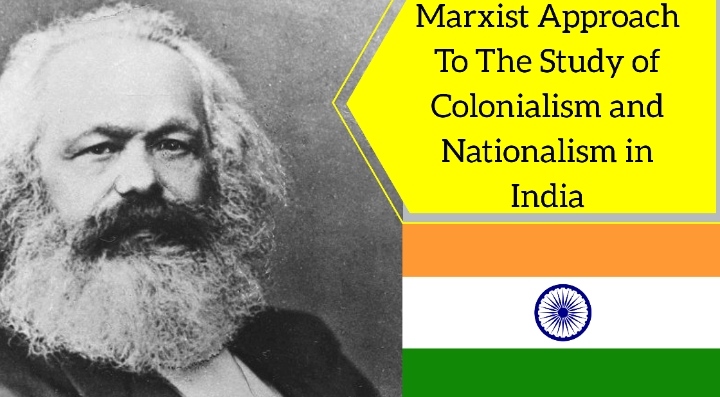 The Marxist Approach, unlike Imperialist and Nationalist Approach, also very essential and significant approach in the study of nationalism in India.

The Marxist school emerged on the since later, its foundations, so far the study of the nationalist movement is concerned were laid by R. Palme Dutt and A.R. Desai. But several others also have developed it over the years. Unlike the imperialist school, the Marxist historians clearly see primary contradiction as well as the process of nation-making, and unlike the nationalist, they also take full note of the inner contradiction of Indian society.

According to the Soviet historians, the foundation of the Indian National Congress (INC) was inseparably connected with the rise of an indigenous Indian Capitalist industry.

Accordingly to the theory of economic determinism, changes in the structure of the economy, produced new social relationships, transforming society from a mere status-based to a contract-based one, and set in motion large scale social mobility which had never taken place in India before.

The political struggle for freedom was a culmination of the social change which started in Bengal during the second half of the eighteenth century, a product of the disruption of the old economic and social order proceeding from the growth of a market society.

The penetration of British trade in the interior and the British land settlements which made the land a saleable and alienable commodity helped in the growth of a market economy in India, and as a result, a new social class of traders, merchants, the subordinate agent of the company and Private British Traders, middlemen and money-leaders sprang up.

The political development of the modem beginning of the nineteenth century can be considered as the history of the struggle of this class to find a new identity.

B.B. Mishra, a Non-Marxist historian, has also expressed the view that radical changes under British rule, emanating from the progress of education and advancement of technology, which led to the growth of a middle class whose component parts exhibited an element of uniformity despite being heterogeneous and even mutually conflicting at time.

B.B Mishra also specifies the economic process by which these social developments were brought about in a country.

Modern capitalism in India developed from the import of foreign capital and skill as a pill of the transformation of India as an appendage to the imperial economy, for producing raw materials to feed the British industry.

The export of agricultural produced created a trade surplus which paid for the construction of railways and other public works, as well as for the import of capital goods and machinery which began to process locally the raw materials earlier developed for export.

K.M. Panikkar, another non-Marxist historian, also emphasized the central role of the new middle class in the national movement. But instead of specifying any decisive economic change behind their emergence. he pointed to shift in the center of power and influence within Indian society as a result of the administrative and political impact of the British Raj.

Panikkar uses the term class rather loosely. Sometimes using it almost as a synonym forecast. Marxist historians have used the concept more rigorously and have attributed the emergence of new classes in Indian society to specific economic progress.

R.P. Dutt whose Indian, today still remains the most authoritative Marxist work on modern India, wrote that the growth of the modern industry in the second half of the nineteenth country led to the rise of the bourgeoisie, together with a new educated middle class of lawyers, administrators, teachers, and journalists.

The writings of quite historians and sociologists echoed the same view before and after Independence.

But gradually there was a shift of emphasis from R.P. Dutta‘s bourgeoisie to intermediate groups variously designated as the educated middle class, the Petty bourgeoisie, and the intelligentsia.

A.R. Desai‘s work on Indian nationalism took up in this respect the earlier threads woven into the brilliant analysis of MN. Roy. With the growth of modem industries, wrote Professor Desai, new classes of modern bourgeoisie and a working-class came into existence along with the professional classes.

The intelligentsia, drawn from the professional classes, developed before the industrial bourgeoisie and led the national movement in each phase.

The more recent work of the soviet historian has followed the lines indicated by A.R Desai.

N.M. Goldberg, a leading soviet ideologist, has introduced a somewhat tentative distinction, the class basis of the moderate and extremist movements within the Indian National Congress.

In his view the native capitalist class, weak and tied to foreign economic interests, was irresolute on the demand which it expresses leaders; but the petty-bourgeois i.e. who lay behind the extremist movement were more forthright.

In a complementary study of urban Maharastra in the late nineteenth century. V.J. Pavlov observes that India’s national industrial bourgeoisie first developed in Bombay by accumulating capital in comprador activities associated with European merchant capital operating in the overseas cotton trade and the opium trade with China.

Bipan Chandra, who exhibits this new reaction, assigns the most important role in the rise of Indian nationalism to the formulation of ideology by the Indian intelligentsia, though he allows some weight to the growth of the Indian capitalist class.

To him, the problem concerns the real nature of imperialism and how it contradicted the true interests of all classes of Indian people.

In his view, the realization of this problem by the intelligentsia and their consequent propagation of an anti-imperialist ideology, which represented the common interests of all classes of India, gave rise to Indian nationalism.

ln, any case, Bipan Chandra points out, It was not a First World War that they received any support from leading men of commerce and industry.

He points to the inconvenient facts of indifference and even hostility shown towards swadeshi by the bulk of the professional trading community in Bengal and the lukewarm attitude of the industrial bourgeoisie of Bombay and Gujarat.

He also observes that the glib talk the urban petty-bourgeois character of the swadeshi movement obscures the link which so many of the participants had with the land through some form of Zamindari or intermediate tenure.

They also tend to see the movement as a structured bourgeois or capitalist movement. It was not the bourgeoisie movement and miss its open-ended and all-class character.

They see the bourgeoisie as playing the dominant role in the movement-they tend to equate or conflate the national leadership with the capitalist or bourgeoisie class.

They also interpret the class character of the movement in terms of its forms of struggle for instance in its non-violent charecter, which was the central idea of Mahatma Gandhi. A few takes an even narrow view.

They suggest that access to financial resources of the country determined the ability to influence the course and direction of nationalist politics.

Many of the Marxist writers also do not have an actual detailed historical investigation of the strategy, program, ideology, extent, forms of mass mobilization, and strategic and tactical maneuvers of the national movement.