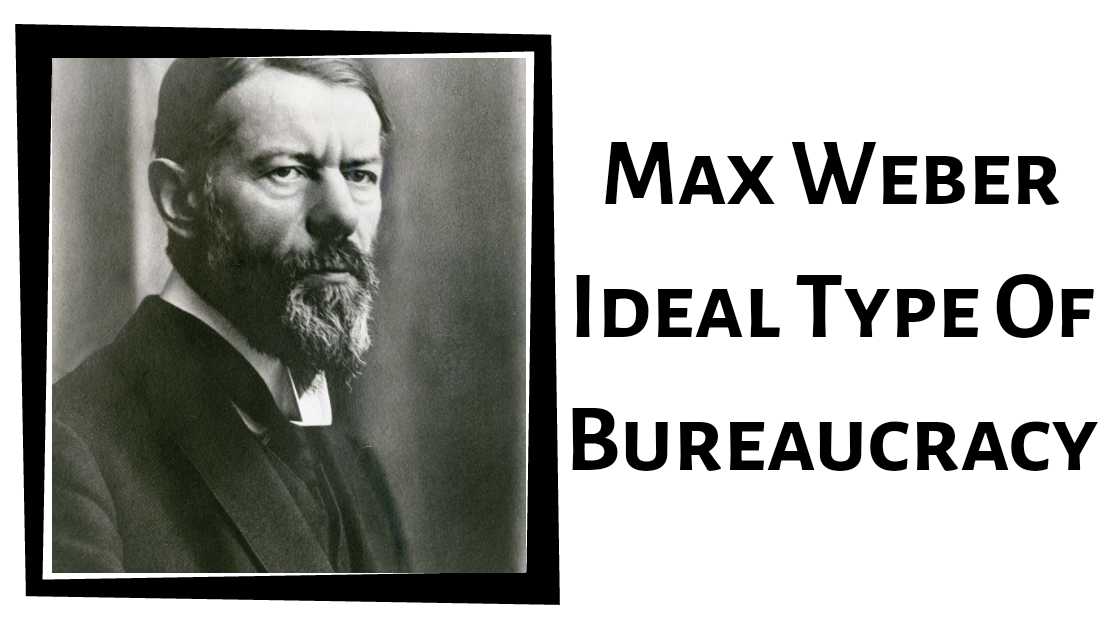 The term “bureaucracy” has not come with the article of max weber because this word had been seen in 1745 for the first time, but must be clear about the fact that- Max Weber’s name is synonymous with
bureaucracy and he enjoys a unique place in the galaxy of social scientists who have attempted to explain the concept of bureaucracy.

The classical writings on bureaucracy came from Karl Marx, Max Weber, Robert Michels, and Gaetano Mosca. However, the systematic study of bureaucracy began with Max Weber.

According to Max Weber, bureaucracy is an administrative body of appointed officials. He excluded elected one from the preview of bureaucracy.

Therefore, Mohit Bhattacharya rightly writes, “in Weberian formulation, bureaucracy is not to be confused with the civil service.”

To understand Max Weber ideal type of bureaucracy one must understand ‘Theory of Authority’ first.

To Max Weber, authority, power, and control were different from each other.

To him, if one succeeds in imposing his will in a social relationship, despite resistance then only it can be said that the person has ‘power’. And if this exercise of power becomes controlled then it is termed as ‘authoritarian power of command’.

To Weber, ‘authority’ was identical with the ‘authoritarian power of command’.

According To Weber, these are five essential components of authority:

According to Max Weber, domination or exercise of authority is called ‘administration’. While other says, the administration is service or performance of duty.

“ An authority exists as long as it is accepted as legitimate by the ruled.”

Authority derived its legitimacy from the acceptance of ‘traditional norms and customs’.

This is based on the magical power or heroism or other extraordinary gift or qualities of the leader exercising power. He may be a prophet, a hero, or a demagogue.

Weber defines ‘charisma’ as the quality of an individual personality by virtue of which he is treated differently from the ordinary person as blessed with supernatural, superhuman, or at least specifically exceptional powers or qualities. Those who believe in his extraordinary abilities obey his commands.

Legal authority refers to the judicious application of laws, and in accordance with rational principles valid for all members of the organization.

Weber believed that all three types of authority sustained legitimate as long as the ‘ruled’ accept them.

The authority ceases to carry legitimacy – when the rulers do illegal things, ignore the tradition and lose charisma.

In the three types of authority, Weber preferred the legal type of authority because it is inherent rationality. He says ‘legal authority’ is suitable for modern governments.

This system is called ‘rational’ because in it the means are expressly designed to achieve certain specific ends. It is ‘legal’ because authority is exercised using a system of rules and procedures.

His model of bureaucracy is also known as the ‘Weberian Model of Bureaucracy’.
Weber never defined bureaucracy; he only described its characteristics. To him, bureaucracy is “an the administrative body of appointed officials”.

Official business is conducted on a regular basis.

III. BASED ON RULES:

Functions of an administrative agency is based on the written documents of rules.
Rules mainly deal in:

Officials are bound by rules and these rules regulate office conduct. Rules become more important at times than the goal of the organization leading to ‘red-tapism’.

Officials remained unattached and are only concerned with their job without becoming personally involved.

Offices are organized hierarchically. Higher officials or offices supervise while lower offices and officials have the right to appeal.

VI. CANNOT OWN THE OFFICIAL RESOURCES:

Officials do not own the resources necessary for rendering the duties, but they account for the use of official resources. Official business and private affairs, official revenue and private incomes are strictly separated.

Officials cannot use offices as private property which can be sold and inherited.

Administration is conducted on the basis of written documents “the files”.

Certain functions performed by bureaucracy cannot be performed by others. Weber also illustrated the characteristics of the officials.

Officials are personally free (and not a servant to anybody personally).

Officials are appointed to an official position on the basis of a contract.

XII. APPOINTED ON BASIS OF QUALIFICATION:

Official is appointed on his technical (administrative) qualification.

Officials exercises the authority delegated to him in accordance with impersonal rules.

XIV. LOYALTY IS FAITHFUL EXECUTION OF HIS DUTIES:

Officials’ loyalty is expressed
through the faithful execution of his duties.

Official work is rewarded by a regular salary and by prospects of regular advancement in a lifetime career.

Max weber views that bureaucracy keeps on increasing its power.

FACTORS RESPONSIBLE FOR THE RISE OF BUREAUCRACY

According to Max Weber, there are following factors responsible for the rise of bureaucracy:

To control the over-towering power position of bureaucracy, he has also suggested ways to curb bureaucracy from becoming a giant and arbitrary power.
Those are:

That is, the involvement of more than one person in decision making. Its disadvantages are that at times, it is misused and speed of decision and responsibility are held back.

The division of responsibility for the same function among more than one body.

Like at first the CAG had the responsibility of both accounting and auditing that made him a monopoly and transparency, as well as efficiency, was subverted.

Thus, accounting was given to another body and now CAG only performs auditing functions. Thus, both the bodies keep a check on each other and the government collectively.

That is administered by unpaid persons.

It placing the bureaucrats under supervision and guidance of an assembly to ensure their accountability to the people.

That is, control through elected representative bodies (assemblies or parliaments).

CRITIQUE OF WEBER’S MODEL OF BUREAUCRACY

Many renowned scholars critique bureaucracy in totality by calling it – bungling, arbitrary, wasteful, rigidness and mechanical, inhuman and soulless and despotic.

Gouldner, a scholar who tested Weber’s ideal type bureaucracy over many decades found internal contradictions that reflected tensions between claims of expertise and obedience based on discipline and called Weber’s theory as a machine theory.

2. NOT SUITABLE FOR DEVELOPING COUNTRIES:

Presthus also pointed out the Weberian model as a product of an alien culture which is fairly inadequate for imposition in developing societies.

Weberian bureaucracy was suited for developed nations as there were more uniformity and less welfare work.

3. MUCH FOCUS ON RULES, LESS ON CUSTOMERS:

Weber’s over-emphasis on rules and precision seems to be self-defeating as the officials will be caught up in these only and not be bothered about their customers that is the people.

Talcott Parsons state that there will always be a conflict with subordination and hierarchy as the person issuing orders might not have the professional skill for the job of juniors that he is supervising and this will give rise to conflicts thus rigidity should be replaced with flexibility art times to solve this.

5. UNDERMINE THE BEHAVIOUR OF OFFICIALS IN ADMINISTRATION:

Weber’s bureaucratic model is said to be lacking the consideration that people running administration come from different backgrounds and have different cultures and might not view every action and decision the same way as a robot as compared to others.

6. BUREAUCRACY IS ARM OF STATE:

Karl Marx considered bureaucracy as an arm and agent of the state and the ruling class or bourgeois and was exploitative in its nature. However, he could not suggest any reforms or alternatives to a bureaucratic structure and could not get rid of it either.

Thus, Max Weber’s theory of bureaucracy does stand strong till today with timely reforms as it is yet to find a successor or a more viable alternative.

1. UNRESPONSIVE TO POPULAR DEMAND AND DESIRES.

2. RED TAPE OR OVER FORMALISM:

Officials only following rules all the time and so files take longer to travel from desk to desk.

Increase of staff but no increase in work thus leading to taxpayers paying more money for nothing.

Ministers are responsible in a democracy for their bureaucracy’s functioning in their ministry.

Bureaucracy encourages the evil work of govt. into several isolated and self-dependent sections each pursuing its own needs without any adequate correlation with the rest.

Develops a negative psychology that breeds non-transparency and stoppage to information.

Weberian bureaucracy is still relevant because of the following reasons:

Despite many criticisms, both public, as well as private organizations, follow Weberian bureaucracy religiously. For instances:

Bureaucracy has succeeded in the test of time and place. It can be found everywhere, whether it is socialist or capitalist.

Welfare state cannot boycott Weberian bureaucracy because some of the functions of the welfare state and development programs cannot be completed without bureaucracy and people look to bureaucracy for their day-to-day requirements.

4. CAN BE REFORMED IF TIME DEMANDS:

Max Weber studied the various factors and the condition that contributed to the growth of bureaucracy in ancient as well as modern times, i.e the development of modern large scale organizations and technology and the capitalist system. His theory has helped develop a structure of bureaucracy and also infuse professionalism into it in modern times.

Weberian bureaucracy is more capable of operating with greater efficiency and rationality if timely reformed from time to time as per the time and situation demands to make it more relevant to the present day.