The Mycenaean Civilization (1500 BCE- 1250 BCE) flourished in the last phase of Bronze Age, from the 15th to the 13th century BCE and extended its influence not only through out the Peloponnese  in Greece but also across the Aegean, in particular, on Crete and the Cycladic islands.The Mycenaeans were influenced by the earlier Minoan civilization  (2000 BCE -1500 BCE) which had spread from its origins at Knossos, Crete to include the wider Aegean. Architecture, art, Economic Activity and religious practices were assimilated and adapted to better express the perhaps more militaristic and austere Mycenaean culture. 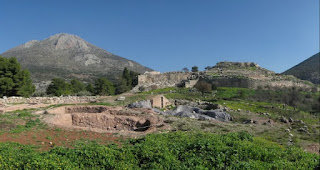 IMPORTANT AND MAJOR CENTER IN MYCENAEAN

On mainland Greece which we called
Mycenaen their are many important and major centres which also flourished in the period of 1500- 1250 BCE  included Mycenae  (traditional home of Agamemnon), Tiryns  (perhaps the oldest centre), Pylos (traditional home of Nestor), Thebes, Midea, Gla, Orchomenos, Argos, Sparta, Nichoria and probably Athens. Beyond trading relations, the exact political relationship between these centres is not clear. However, there were many shared cultural features such as architecture, frescoes, pottery, jewellery, Linear B (an adaptation of the Minoan Linear A). weaponry, and of course, the Greek language and writing in the form of 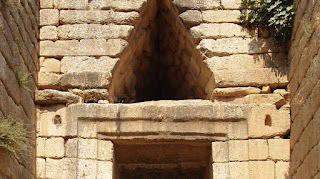 As the founding evidence from Mycenaean we found there people are highly Involve in the Activity of Architecture.

A large palace complex has been found at most of the Mycenaean centres. These complexes, whilst displaying some site-unique developments, also display important architectural features in common. The complexes were built around a large rectangular central hall or Megaron.

The Mycenaean Megaron was the precursor for the later Archaic and Classical temples of the Greek world and consisted of an entrance porch, a vestibule and the hall itself. This was the heart of the palace and contained a large circular hearth (usually more than 3m in diameter) with four wooden columns supporting a holed ceiling or light-well.

It was also the throne room of the ruler or wannax. There is usually a second, smaller hall (Queen’s Megaron), many private apartments and areas set aside for administration, storage and manufacturing. Rooms were richly decorated with fresco paintings on the walls and plaster painted floors. Regarding materials, rooms in the palace were constructed with rubble fill and cross-beamed walls covered in plaster inside and limestone blocks outside. Columns and ceilings were usually of painted wood, sometimes with bronze additions.

The whole palace complex was surrounded by a fortification wall of large unworked blocks (termed Cyclopean as it was believed that only the Cyclopes could have moved such massive stones). Such walls could reach 13m in height and be as much as 8m thick. Corbel galleries – arched corridors created by progressively overlapping stone blocks, circular stone tombs with corbelled roofs, and monumental doorways with massive stone lintels with relieving triangles are also common features of Mycenaean sites. Other Mycenaean architectural structures include damns for flood management, particularly at Tiryns, and bridges built from large roughly-hewn stone blocks. 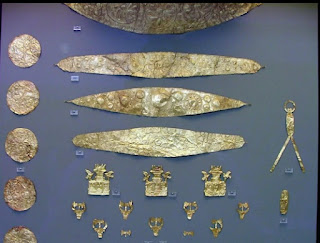 Likewise earlier Minoan Civilization they also engaging in the Activity of Trading.
The Mycenaean civilization had trading contact with other Aegean cultures is evidenced by the presence of foreign goods in Mycenaean settlements such as gold, ivory, copper and glass and by the discovery of Mycenaean goods such as pottery in places as far a field as Egypt, Mesopotamia,the Levant, Anatolia, Sicily and Cyprus. No doubt perishable goods such as oil and wine were also significant Mycenaean exports.

KNOWLEDGE OF ARTS IN MYCENAEAN 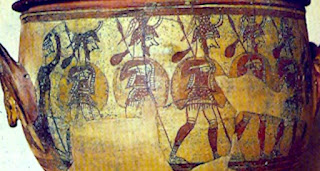 In art as expressed in fresco, pottery and jewellery, the Minoan love of natural forms and flowing design was likewise adopted by the Mycenaean artisans but with a tendency to more schematic and less life-like representation. This new style would become the dominant one throughout the Mediterranean. Geometric designs were popular, as were decorative motifs such as spirals and rosettes. Pottery shapes are much like the Minoan with the notable additions of the goblet and the alabastron (squat jar) with a definite preference for large jars. Terracotta figurines of animals and especially standing female figures were popular, as were small sculptures in ivory, carved stone vessels and intricate gold jewellery. Frescoes depicted plants, griffins, lions, bull-leaping, battlescenes, warriors, chariots, figure-of-eight shields and boar hunts, a particularly popular Mycenaean activity.

Little is known for certain regarding Mycenaean religious practices beyond the importance given to animal sacrifice, communal feasting, pouring of libations and offerings of foodstuffs.
The presence of double axe carvings and horns of consecration in art and architecture suggest strong links with the Minoan religion, although these symbols may have been adopted because of their political resonance.

Architectural features such as sunken basins and fresco depictions of altars hint that the Megaron may have had a religious function.

Many centres also had specific sanctuary sites for worship, usually close to the palace complex. It is clear that burial was an important ritual as evidenced by the presence of monumental tholos tombs, prominent grave sites and the quantity of precious objects which were buried with the dead – golden masks, diadems, jewellery and ceremonial swords and daggers.

The mysterious end of the Mycenaean civilization during the Bronze Age Collapse around 1200 BCE (possibly through earthquake, invasion or in-fighting) came the so-called Dark Ages and it would be many centuries before Greek culture would finally regain the heights of the late Bronze Age.
Post Views: 7