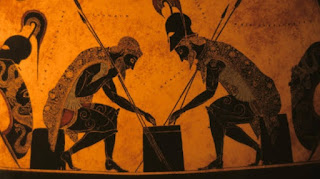 The Greek Dark Age period come after the collapse of Mycenaean palatial civilization around 1100 BC to the first signs of the Greek poleis, city states, in the 9th century BC.
According to the archaeological evidence a widespread collapse of Bronze Age civilization in the Eastern Mediterranean world at the outset of the period, as the great palaces and cities of the Mycenaeans were destroyed or abandoned. Around then many important Civilization, cities suffered huge disruption and destruction like; Disruption of Hittite civilization, cities from Troy to  Gaza were destroyed.
Following the collapse, fewer and smaller settlements suggest famine and depopulation.
In Greece, the Linear B writing of the Greek language used by Mycenaean bureaucrats ceased. After the collapse of Mycenean civilization 1100 BC the decorative skill has been decreased.


It was previously thought that all contact was lost between mainland Hellenes and foreign powers during this period, yielding little cultural progress or growth but artifacts from excavations at Lefkandi on the Lelantine Plainin Euboea show that significant cultural and trade links with the east, particularly the Levant coast, developed from c. 900 BC onwards. Additionally, evidence has emerged of the new presence of Hellenes in sub-Mycenaean Cyprus and on the Syrian coast at Al-Mina.

Many important and well organized society of Mycenaean Civilization were significantly destroyed and abandoned by people who live there. Highly organized culture began to be abandoned or destroyed. Population also decreased significantly.

Some archeologist suggest that may be there is climatic or environmental catastrophe which is the reason for collapse of mycenaean civilization.
Invasion by Dorians or by the sea peoples also the factor for collapse.


Changes Occured in Mycenaean Civilization after its Collapsed :

The practice of wall painting may have ceased.

Writing in the Linear B script ceased particularly because the redistributive economy had crashed, and there was no longer a need to keep records in Linear B script.

Vital trade links were lost, and towns and villages were abandoned.

The population of Greece was reduced, and the world of organized state armies, kings, officials, and redistributive systems disappeared. Most of the information about the period comes from burial sites and the grave goods contained within them.


The pottery style, Proto geometric style signaled the loss of previous designs that were more complex. These newer designs were simpler, including only lines and curves, signaling a simplified society.
Generalizations about the “Dark Age Society” are generally considered false, because the various cultures throughout Greece cannot be grouped into a large “Dark Age Society” category.

Tholos tombs are found in early Iron Age Thessaly and in Crete but not in general elsewhere, and cremation is the dominant rite in Attica but nearby in the Argolid, it was inhumation. Some former sites of Mycenaean palaces, such as Argos or Knossos, continued to be occupied. The fact that other sites experienced an expansive “boom time” of a generation or two before they were abandoned has been associated by James Whitley with the “big-man social organization”, which is based on personal charisma and is inherently unstable: he interprets Lefkandi in this light.

The Etruscans benefited from the innovations. Old Italic spread throughout Italy from the 8th century. Other variants of the alphabet appear on the Lemnos Stele and in the alphabets of Asia Minor.

The previous Linear scripts were not completely abandoned: the Cypriot syllabary, descended from Linear A, remained in use on Cyprus in  Arcadocypriot Greek and Eteocypriot  inscriptions until the Hellenistic era. 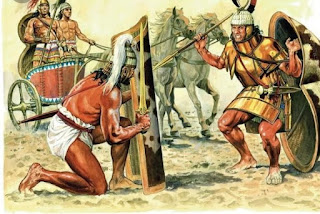 Greek dark age large-scale revolts took place in several parts of the eastern Mediterranean, and attempts to overthrow existing kingdoms were made as a result of economic and political instability by surrounding people, who were already plagued with famine and hardship. Part of the Hittite Kingdom was invaded and conquered by the so-called Sea Peoples, whose origins, perhaps from different parts of the Mediterranean such as the Black Sea, the Aegean and Anatolian regions, remain obscured. The 13th- and 12th-century inscriptions and carvings at Karnak and  Luxorare the only sources for “Sea Peoples”, a term invented by the Egyptians themselves and recorded in boastful accounts of Egyptian military successes. For these so-called “Sea Peoples”, there is little more evidence than these inscriptions.

The fragmented, localized and autonomous cultures of reduced complexity are noted for such diversity of their material cultures in pottery styles (conservative in Athens, eclectic at Knossos), burial practices and settlement structures.
Some regions in Greece, such as Attica, Euboea and central Crete, recovered economically from these events faster than others, but life for the poorest Greeks would have remained relatively unchanged as it had done for centuries. There was still farming, weaving, metalworking and pottery but at a lower level of output and for local use in local styles. Some technical innovations were introduced around 1050 BC with the start of the Protogeometric style (1050–900 BC), such as the superior pottery technology that included a faster potter’s wheel for superior vase shapes and the use of a compass to draw perfect circles and semicircles for decoration. Better glazes were achieved by higher temperature firing of clay. However, the overall trend was toward simpler, less intricate pieces and fewer resources being devoted to the creation of beautiful art.
The smelting of iron was learned from Cyprus and the Levant and was exploited and improved upon by using local deposits of iron ore previously ignored by the Mycenaeans: edged weapons were now within reach of less elite warriors. Though the universal use of iron was one shared feature among Dark Age settlements, it is still uncertain when the forged iron weapons and armour achieved superior strength to those that had been previously cast and hammered from bronze. From 1050, many small local iron industries appeared, and by 900, almost all weapons in grave goods were made of iron.
The distribution of the Ionic Greek dialect in historic times indicates early movement from the mainland of Greece to the Anatolian coast to such sites as Miletus, Ephesus, and Colophon, perhaps as early as 1000, but the contemporaneous evidence is scant. In Cyprus, some archaeological sites begin to show identifiably Greek ceramics, a colony of Euboean Greeks was established at Al Mina on the Syrian coast, and a reviving Aegean Greek network of exchange can be detected from 10th-century Attic Protogeometric pottery found in Crete and at Samos, off the coast of Asia Minor.

It is likely that Greece during this period was divided into independent regions organized by kinship groups and the oikoi or households, the origins of the later poleis.
Excavations of Dark Age communities such as Nichoria in the Peloponnese have shown how a Bronze Age town was abandoned in 1150 BC but then reemerged as a small village cluster by 1075 BC. At this time there were only around forty families living there with plenty of good farming land and grazing for cattle. The remains of a 10th century building, including a megaron, on the top of the ridge have led to speculation that this was the chieftain’s house. This was a larger structure than those surrounding it but it was still made from the same materials (mud brick and thatched roof). 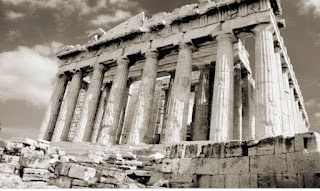 It was perhaps also a place of religious significance and of communal storage of food. High status individuals did in fact exist in the Dark Age, but their standard of living was not significantly higher than others of their village. Most Greeks did not live in isolated farmsteads but in small settlements. It is likely that, as at the dawn of the historical period two or three hundred years later, the main economic resource for each family was the ancestral plot of land of the oikos, the kleros or allotment; without this a man could not marry.

What is Lefkandi Burial ?

Lefkandi on the island of Euboea was a prosperous settlement in the Late Bronze Age, possibly to be identified with old Eretria. It recovered quickly from the collapse of Mycenaean culture, and in 1981 excavators of a burial ground found the largest 10th-century building yet known from Greece. Sometimes called “the heroon“, this long narrow building, 50 metres by 10 metres, or about 150 feet by 30 feet, contained two burial shafts. In one were placed four horses and the other contained a cremated male buried with his iron weapons and an inhumed woman, heavily adorned with gold jewellery.

The man’s bones were placed in a bronze jar from Cyprus, with hunting scenes on the cast rim. The woman was clad with gold coils in her hair, rings, gold breast plates, an heirloom necklace (an elaborate Cypriot or Near Eastern necklace made some 200–300 years before her burial) and an ivory-handled dagger at her head.

The horses appeared to have been sacrificed, some appearing to have iron bits in their mouths. No evidence survives to show whether the building was erected to house the burial, or whether the “hero” or local chieftain in the grave was cremated and then buried in his grand house; whichever is true, the house was soon demolished and the debris used to form a roughly circular mound over the wall stumps.
Within the next few years and down to about 820 BC, rich members of the community were cremated and buried close to the eastern end of the building, in much the same way as Christians might seek to be buried close to a saint’s grave; the presence of imported objects, notable throughout more than eighty further burials, contrast with other nearby cemeteries at Lefkandi and attest to a lasting elite tradition.

By the mid- to late-8th century BC, a new alphabet system was adopted from the Phoenicians by a Greek with first-hand experience of it. The Greeks adapted the abjad used to write Phoenician, notably introducing characters for vowel sounds and thereby creating the first truly alphabetic writing system.

The new alphabet quickly spread throughout the Mediterranean and was used to write not only the Greek language, but also Phrygian Phrygian and other languages in the eastern Mediterranean. As Greece sent out colonies west towards Sicily and Italy (Pithekoussae, Cumae), the influence of their new alphabet extended further.

The ceramic Euboean artifact inscribed with a few lines written in the Greek alphabet referring to “Nestor’s cup”, discovered in a grave at Pithekoussae (Ischia) dates from c. 730 BC; it seems to be the oldest written reference to the Iliad.