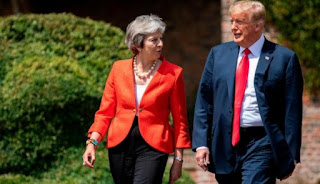 U.S. President Donald Trump promised  a “phenomenal” post Brexit trade deal  with Britain as he met outgoing Prime  Minister Theresa May on Tuesday to boost their frayed alliance against a  backdrop of political turmoil.
● As protesters angered by his state  visit  flew a huge baloon of a baby  Trump in diapers and blocked traffic in central  London, the U.S. leader heaped  praise  on Ms. May and scorn on Opposition Labour chief Jeremy Corbyn.
The U.S. President dismissed thousands of  protesters rallying nearby as “fake news” and  said  he turned down a meeting with Mr. Corbyn — who himself took part in the protest —  branding him a  “somewhat  negative force”.
● “There is tremendous potential in that trade deal. I say probably two and even three times of  what we’re doing right now,” he told a joint press conference with Prime Minister Theresa May.
● Supporters of Brexit believe a new trade agreement with the United States is crucial to Britain’s  success outside  the EU.
Concern over NHS
● But there are concerns among  some British politicians that the much loved state run national health service would  be opened up to U.S. private  companies.
● “When you’re dealing on trade,  everything is on the table. So NHS or  anything else. A lot more than  that,” Mr. Trump told reporters. Ms. May is stepping down in the coming weeks  over her failure to deliver Brexit on time,  but she and her Health Minister have  said the NHS is not for sale.
On Tuesday, she said Britain remained  committed to “an ambitious free trade agreement” after Brexit.
● But she added:  “The point about making trade deals  is, of course, that both sides negotiate and come to an agreement about what should or should not be in that trade deal for the future.”
x
Post Views: 9