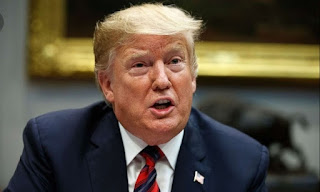 On Saturday in Tokyo, US National Security Adviser John Bolton also said there is “no doubt” the ballistic missile launches violate UN resolutions, in contrast to Mr. Trump’s stance.

US President Donald Trump on Sunday  maintaining and reiterated his “confidence” in North Korean leader Kim Jong-un despite Pyongyang launching missile tests earlier this month.
“North Korea fired off some small weapons, which disturbed some of my people, and others, but not me,” Mr. Trump tweeted from Japan where he is on an official visit.
“I have confidence that Chairman Kim Jong-un will keep his promise to me,” he added, apparently referring to what he has reported as a pledge by Mr. Kim to freeze the testing of missiles and nuclear weapons, Efe news reported.
The Pyongyang regime launched several short-range ballistic missiles on May 4 and 9 in tests overseen by the North Korean dictator. Some countries, including Japan, say the moves violate UN Security Council resolutions.
Both the US and one of its regional allies, South Korea, downplayed the importance of the tests earlier this month, which came amid the stalemate in negotiations between Washington and Pyongyang to achieve the denuclearization of the Korean Peninsula.
In his tweet, Mr. Trump also echoed recent North Korean criticism of former US Vice President Joe Biden, who was accused by Pyongyang of being a “fool of low—IQ”.
The criticism made by North Korean state media emerged after Mr. Biden at a campaign launch in Philadelphia last week asked if the US had become “a nation that embraces dictators like [Russian President Vladimir] Putin and Kim Jong—un”, referring to Mr. Trump’s international ties.
An article by the official news agency KCNA said Mr. Biden was an “imbecile bereft of elementary quality as a human being”.
Referring to those criticisms, Mr. Trump said today that he had “smiled” when North Korea called “Joe Bidan (sic) a low IQ individual, & worse”.
“Perhaps that’s sending me a signal?” the US president added in the tweet.
Mr. Trump was scheduled to play a round of golf with Japanese Prime Minister Shinzo Abe on Sunday and later attend the final of a sumo wrestling tournament.
On Monday, he will be received by the new emperor, Naruthito, and will meet with Mr. Abe.