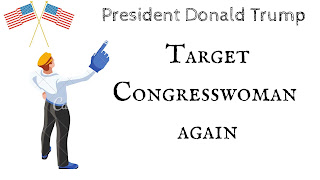 President Donald Trump on Monday increased his attacks on four first-term Democratic Congresswomen and warned the party about uniting “around the foul language & racist hatred spewed” from the American women whom he recently told to “go back” to their own countries.
Mr. Trump demanded that the four Congresswomen, Reps. Alexandria Ocasio-Cortez of New York, llhan Omar of Minnesota, Rashida ’l‘laib of Michigan and Ayanna S. Pressley of Massachusetts, issue their own apologies to him and “the people of Israel”. Ms. Omar is the only one of the four who was born outside the U.S.

“When will the Radical Left Congresswomen apologise to our Country, the people of Israel and even to the Office of the President, for the foul language they have used, and the terrible things they have said,” he wrote. “So many people are angry at them & their horrible & disgusting actions!”

“If Democrats want to unite around the foul language & racist hatred spewed from the mouths and actions of these very unpopular & unrepresentative Congresswomen, it will be interesting to see how it plays out,“ he wrote in another tweet. “I can tell you that they have made Israel feel abandoned by the US.”

‘Aim higher’ Few Republicans have responded to Mr. Trump’s comments, widely seen as racist. On Monday, Sen. Lindsey Graham encouraged Mr. Trump to “aim higher”, while also calling Ms. OcasioCortez and the other three lawmakers communists. “We all know that AOC and this crowd are a bunch of communists,” Mr. Graham said on Fox News. “They hate Israel, they hate our own country.” But he also pushed back against the President’s suggestion that the women are not American.

“They are American citizens,” he said. “Mr. President, you’re right about their policies. Just aim higher.”

On Sunday, Speaker Nancy Pelosi, D-Calif., responded to the President and suggested he was advocating white nationalism.

“When @realDonaldTrump tells four American Congresswomen to go back to their countries, he reaffirms his plan to ‘Make America Great Again’ has always been about making America white again,” she said in a Twitter post