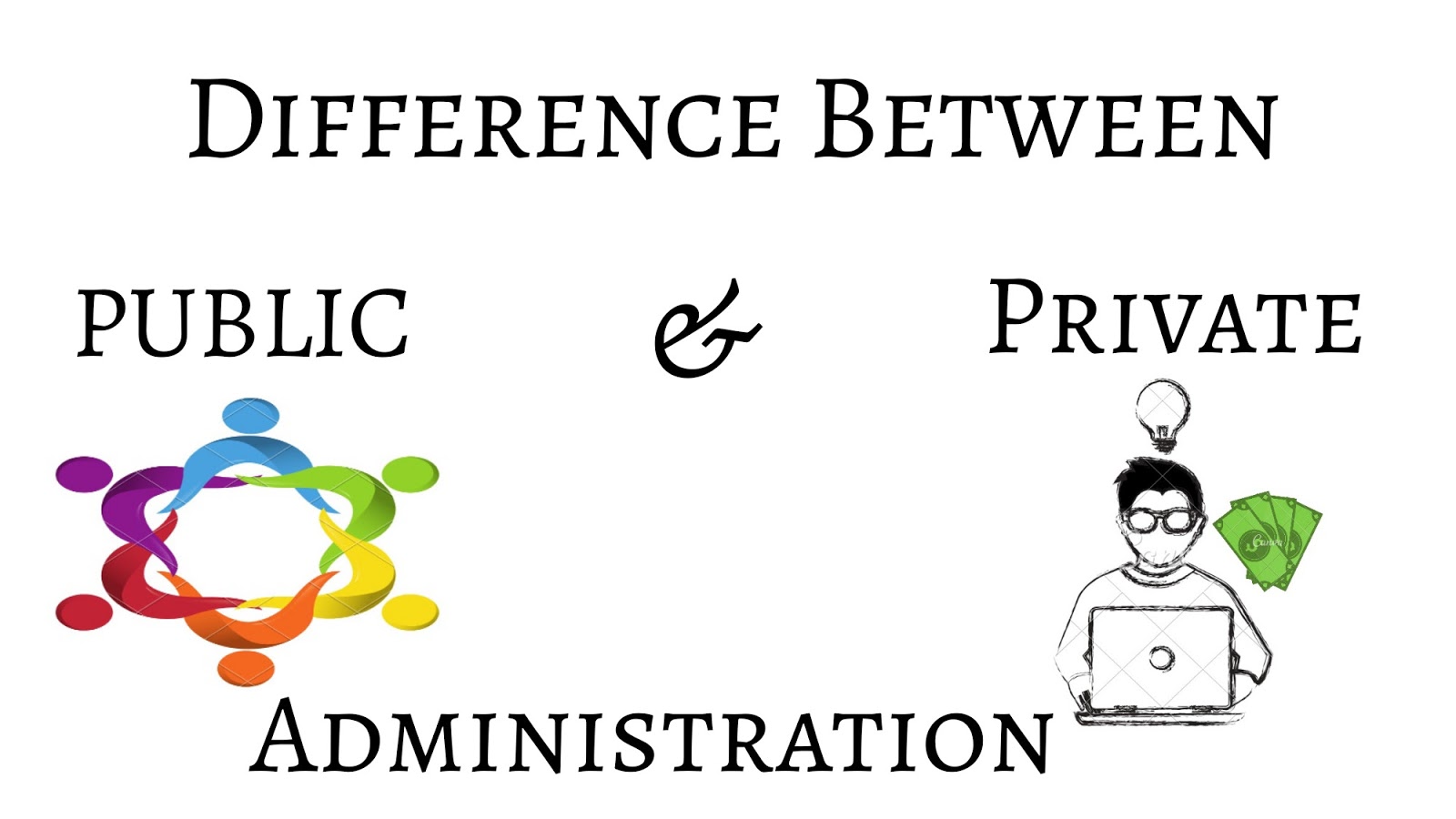 “The meaning which I have given to the word administration, and which has been generally adopted, broadens considerably the field of administrative science. It embraces not only the public service but enterprises of every size and description, of every form and every purpose. All undertakings require planning, organization, command, coordination, and control, and to function properly, all must observe the same general principles. We are no longer confronted with several administrative sciences, but with one which can be applied equally well to public and private affairs.”

Administration is a long and slightly pompous word but it has humble meaning, for it means to care for or to look after people; or to manage affairs.

DIFFERENCES BETWEEN PUBLIC AND PRIVATE ADMINISTRATION

Public administration is subjected to the political direction in policy matters. Minister lays down the broad policy outlines under which bureaucrat has to implement the policy. Though operational autonomy is granted to public policy administrators, they are not responsible for their actions to the legislature. Minister is responsible for all acts of omission and commission of his department to the parliament. No such arrangements exist in private administration.

Public administration is subject to the principle of external financial control. Government revenues are controlled by people’s representatives through the legislature. In private administration, finance is controlled internally.

ACCORDING TO PAUL H. APPLEBY:

“Government administration differs from all other administrative works to a degree not even faintly realized outside, by its public nature, the way in which it is subject to public scrutiny and outcry.
An administrator coming into government is struck at once and continually thereafter, by the press and public interests in every detail of his life, personality and conduct. The interest often runs to details of administrative action that in private business would never be of concern other than inside the organization.” (Appleby 1945:7)
According to him, three aspects differentiate the government from private administration namely, breadth of scope, impact, and consideration; public accountability; and public character.
As regards the first aspect, He says, “The organized government comprehends in some way and it impinges upon and is affected by practically everything that exists or moves in our society. Its fullest possible understanding requires the wisdom of anthropologists, the historians, the economist, the sociologist, the political scientist, the farmer, the laborer, the merchant, the industrialist, the banker, the politician, the philosopher and many more”. Private administration cannot claim this breadth of government.
About Political Character of public administration, Appleby argues that administration is politics since it must be responsive to public needs and demands. He Hence writes:

It is necessary to emphasize the facts that popular political processes which are the essence on democracy, can only work through the governmental organization, and all governments organization not merely administrative entities, they are and must be political organisms. (Appleby 1945:18)

Although public administration has acquired certain distinctive features differentiating it from private administration that includes its profit motive, legal character, nature of the operation, financial control, and monopolistic nature, the difference is minor in a present-day liberalized economy. “By and large,” writes Appleby, “those who do not normally and consistently feel a great interest in government, will not be good prospects.

ACCORDING TO HERBERT A. SIMON, THE DISTINCTION BETWEEN PUBLIC AND PRIVATE ADMINISTRATION RELATES MAINLY TO THREE POINTS:

THE MORE IMPORTANT DISTINGUISHING FEATURES OF PUBLIC ADMINISTRATION MAY BE DESCRIBED UNDER THE FOLLOWING SUBHEADS:

The absence of profit motive in the public administration is another feature, which distinguishes it from the private administration. The primary purpose of the governmental organization is to provide services to the people and promote social good.

Public administrators who serve in the government enjoy high status and prestige in comparison to their counterparts in private enterprises, especially in developing countries.

All the actions of public administration are exposed to wide public gaze because the public closely watches its goals, operation, and results achieved. This does not happen in private administration.

Most governments spend more money than the profit such operation may bring. This is because its objective is the welfare and social service. Hence we can say the deficit budget is the characteristic feature of public administration. Conversely, private administration income often exceeds expenditure without which they cannot survive.

Public administration operates within a legal framework. The responsibilities of public administrators are fixed by a set of constitutional practices, laws, and regulations.

A government official is required by law to maintain a high degree of consistency in his dealings with the public. He has to observe the principle of equality of treatment in serving the people. It is a legal obligation not to discriminate against any person.

In the field of public administration, there is generally a monopoly of the government and it does not generally allow private parties to compete with it.
For example, no person or bodies of persons are allowed to establish or perform functions related to public services like national security, foreign relations, law, and order, mint, and currency, as these are the exclusive fields of the government and thoroughly important for the community and polity to prosper.

Public administration has to be very careful in financial matters because it is working as a custodian of people’s money.

SIMILARITIES BETWEEN PUBLIC AND PRIVATE ADMINISTRATION