ROLE OF THE STATE 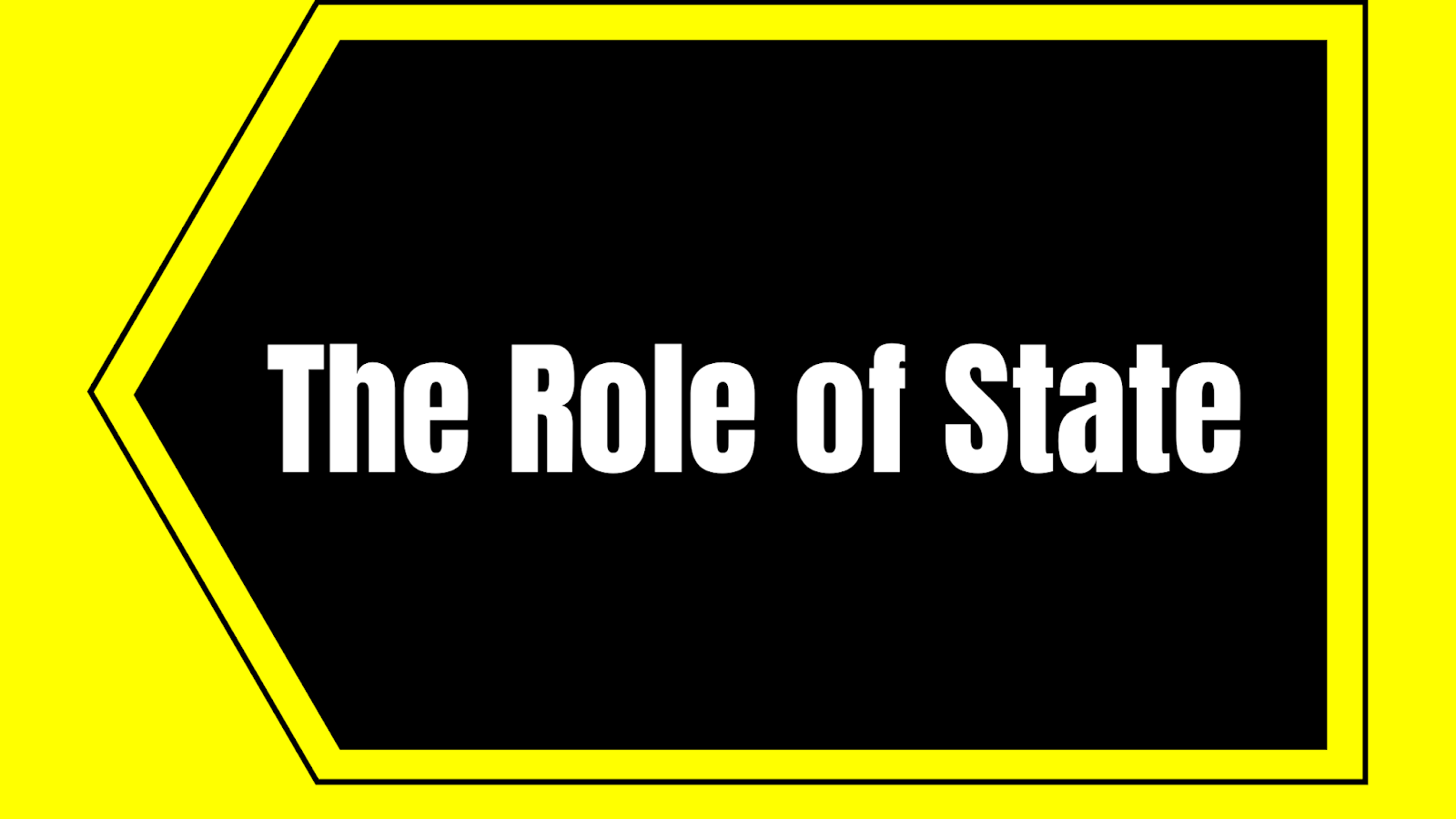 Except for anarchists, all political thinkers have regarded the state as, in some sense, a worthwhile or necessary association. Even revolutionary socialists have accepted the need for a proletarian state to preside over the transition from capitalism to communism, in the form of the ‘dictatorship of the proletariat’. Thinkers have, however, profoundly disagreed about the exact role that the state should play in society. This has often been portrayed as the balance between the state and civil society.

The state, necessarily reflects sovereign, compulsory, and coercive authority. Civil society, on the other hand, embraces those areas of life in which individuals are free to exercise choice and make their own decisions; in other words, it is a realm of voluntary and autonomous associations.

At one extreme in this debate, classical liberals have argued that individuals should enjoy the widest possible liberty and have therefore insisted that the state be confined to a minimal role. This minimal role is simply to provide a framework of peace and social order within which private citizens can conduct their lives as they think best.

The state, therefore, acts, as John Locke put it, as a night watchman, whose services are only called upon when orderly existence is threatened. This nevertheless leaves the state with three important functions :

1. First, the central function of the ‘minimal’ or ‘nightwatchman’ state is the maintenance of domestic order, in effect, protecting individual citizens from one another. All states thus possess some kind of machinery for upholding law and order.

2. Secondly, it is necessary to ensure that the voluntary agreements or contracts which private individuals enter into are respected, which requires that they can be enforced through a court system.

3. Third, there is the need to provide protection against the possibility of external attack, necessitating some form of armed service. Such minimal states, with institutional apparatus, restricted to little more than a police force, the court system, and army, commonly existed in the 19th century but became increasingly rare in the 20th century.

However, since the 1980s, particularly in association with the pressures generated by globalization, there has been a worldwide tendency to minimize or ‘roll back’ state power.

The minimal state is the ideal of the liberal New Right, which argues that economic and social matters should be left entirely in the hands of individuals or private businesses. In their view, an economy free from state interference will be competitive, efficient, and productive; and individuals freed from the dead hand of government will be able to rise and fall according to their talents and willingness to work.

For much of the 20th century, however, there was a general tendency for the state’s role progressively to expand. This had occurred in response to electoral pressures for economic and social security, supported by a broad ideological coalition including social democrats, modern liberals, and paternalistic conservatives. The principal field of government activism had been the provision of welfare designed to reduce poverty and social inequality.

The form, in which social welfare has taken has, however, varied considerably. In some cases, the social security system operates as little more than a ‘safety net’ intended to alleviate the worst incidents of hardship. In the USA, Australia, and, increasingly, the UK, welfare provision usually emphasizes self-reliance and targets benefits on those in demonstrable need.

On the other hand, developed welfare states have been established and persist in many Western European countries. These attempts to bring about a wholesale redistribution of wealth through a comprehensive system of public services and state benefits, financed through progressive taxation.

The second major form of state intervention has taken is economic management. As industrialized economies develop they require some kind of management by a central authority.

In most Western societies this has led to the emergence of ‘managed capitalism’. From the viewpoint of the New Right, however, the government’s economic responsibilities should be restricted to creating conditions within which market forces can most effectively operate. In practice, this means that the state should only promote competition and ensure stable prices by regulating the supply of money. Others, however, have accepted the need for more far-reaching economic management.

Keynesian economic policies have, for instance, been endorsed by social democrats and modern liberals in the hope that they will reduce unemployment and promote growth. Under their influence, public expenditure grew and the state became the most influential of economic actors.

Nationalization, widely adopted in the early post-1945 period, led to the development of so-called ‘mixed economies’, allowing the state to control certain industries directly and to have an indirect influence over the entire economy. Although there is now widespread recognition of the need for a balance between the state and the market in economic life, party politics in much of the industrialized West boils down to a debate about where that balance should be struck.

Ideological battles often focus upon precisely how far the state should intervene in economic and social life as opposed to leaving matters to the impersonal pressures of the market.

A more extensive form of state intervention, however, developed in orthodox communist countries such as the Soviet Union. These sought to abolish private enterprise altogether and set up centrally planned economies, administered by a network of economic ministries and planning committees. The economy was thus transferred entirely from civil society
to the state, creating collectivized states.

The justification for collectivizing economic life lies in the Marxist belief that capitalism is a system of class exploitation, suggesting that central planning is both morally superior and economically more efficient. The experience of communist regimes in the second half of the twentieth century, however, suggests that state collectivization struggled to produce the levels of economic growth and general prosperity that were achieved in Western capitalist countries. Without a doubt, the failure of central planning contributed to the collapse of orthodox communism in the Eastern European revolutions of 1989–91.

The most extreme form of state control is found in totalitarian states. The essence of totalitarianism is the construction of an all-embracing state, whose influence penetrates every aspect of human existence, the economy, education, culture, religion, family life, and so forth.

Totalitarian states are characterized by a pervasive system of ideological manipulation and a comprehensive process of surveillance and terroristic policing. Clearly, all the mechanisms through which opposition can be expressed – competitive elections, political parties, pressure groups, and free media – have to be weakened or removed. The best examples of such regimes were Nazi Germany and the Soviet Union under Stalin.

In effect, totalitarianism amounts to the outright abolition of civil society, the abolition of ‘the private’, a goal which only fascists, who wish to dissolve individual identity within the social whole, are prepared openly to endorse. In one sense, totalitarianism sets out to politicize every aspect of human existence: it seeks to establish comprehensive state control. However, in another sense, it can be regarded as the death of politics, in that its goal is a monolithic society in which individuality, diversity, and conflict are abolished.

CONCLUSION:
The role of the state is perhaps the dominant theme of party political dis-agreement, reflecting different views about the proper relationship between the state and the individual. While some wish to roll back the state and leave matters in the hands of individuals and the market, others want to roll it forward in the cause of social justice and widespread prosperity.