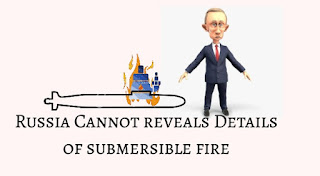 The Kremlin on Wednesday said details of a fire that killed 14 crew on a deep-water submersible will not be made public because they include classified information. The seamen died on Monday, but the disaster was only made public on Tuesday.

Officials have given little information about the vessel or the circumstances of the accident.

Defence Minister Sergei Shoigu said on Wednesday there were survivors of the accident, without clarifying how many.

“This information cannot be made public completely,” Kremlin spokesman Dmitry Peskov said of the disaster. “lt belongs to the category of state secrets.” “lt is completely normal when this kind of information is not made public,” Mr. Peskov said, adding that this was “within the law of the Russian Federation”.

The Defence Ministry said the 14 crew were killed by inhaling poisonous fumes after a fire broke out on a “scientific research deep-sea submersible” studying the sea floor.

However the Novaya Gazeta newspaper cited sources as saying that the accident took place on an AS-12 nuclear mini-submarine, which is capable of going to extreme depths.

The presence of many senior ranking ofhcers on board could suggest the submarine was not on an ordinary assignment.