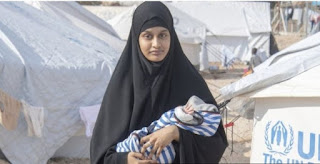 Ms Begum left London to join the Islamic State (IS) group aged 15. Mr Javid revoked her British citizenship when the teenager asked to return.
A family friend said the UK had failed to safeguard the child while Labour said his death was the result of a “callous and inhumane” decision.
A UK government spokesman said the death of any child was “tragic”.
The spokesman said the government had consistently advised against travelling to Syria and would “continue to do whatever we can to prevent people from being drawn into terrorism and travelling to dangerous conflict zones”.
Ms Begum, who left the UK in 2015 with two school friends, was found by a journalist from the Times in a Syrian refugee camp in mid-February.
She said she had been living with her husband, a Dutch IS fighter, in IS’s last stronghold and she had previously lost two children, because of the inhospitable conditions in IS camp.
Nine months pregnant, she told the paper she did not regret joining IS, but that she felt the “caliphate” was at an end.
The Died the Baby son of Shamima begum, Jarrah on Thursday, according to a medical certificate. He was less than three weeks old.
Conservative MP and former justice minister Phillip Lee urged the government to “reflect” on its “moral responsibility” for the tragedy.
He said that despite her “abhorrent views” the decision to remove Ms Begum’s citizenship – and therefore deny her the chance of returning to the UK – seemed “driven by populism and not by any principle I recognise”.
WORST CONDITION IN IS CAMP
Condition of the camp very worst there are lack of essential thing which made the life of people Preventive
1. Lack of Food storage and Warm clothes or tenets.
2. Worst Condition of medical Facilities.
3. Defence and security editor for the Daily Mail Larisa Brown told Newsnight there was no form of heating in the camp and the tents did not have stoves to keep children warm in temperatures that fell to 3C or 4C at night.
In three months, more than 100 people have died on the way or soon after arriving at the camp, with two-thirds of those dying aged under 5 .
David Miliband, former foreign secretary and president of the International Rescue Committee, said the camp faced an emergency as 12,000 “traumatised as well as deeply malnourished” people fled IS rule.
After Ms Begum was stripped of her citizenship, her family wrote to the home secretary to say they planned to challenge the decision and asked for assistance to bring her baby to the UK.
Ms Begum’s sister, Renu Begum, said in the letter Jarrah was the “one true innocent” in the situation.
As her child was born before she was deprived of UK citizenship by the Home Office, the baby would still be considered British.
“This was an entirely avoidable death of a British citizen,”
What was the attempts made by the Home office to Prevent this situation ?
“There was no attempt to help by the Home Office. I think it’s shocking how the home secretary has treated this situation.”
Shadow home secretary Diane Abbott also criticised the actions of the Home Office.
Mr Javid said: “Sadly there are probably many children, obviously perfectly innocent, who have been born in this war zone.
“I have nothing but sympathy for the children that have been dragged into this.
“This is a reminder of why it is so, so dangerous for anyone to be in this war zone.”
“The government’s position that it’s impossible to go and get people out of these camps because it’s too dangerous is repeatedly shown to be not entirely accurate, because journalists are able to get to these camps relatively safely.
SHAMIMA BEGUM ON TWITTER
She tweeted: “It is against international law to make someone stateless, and now an innocent child has died as a result of a British woman being stripped of her citizenship. This is callous and inhumane.”
“Working with the Red Crescent there for example, it should be possible to go and get people from the camps – if there was a political will.”
Kirsty McNeill, head of policy, advocacy and campaigns at the charity Save the Children, said “all children associated with IS are victims of the conflict and must be treated as such”.

“It is possible the death of this baby boy and others could have been avoided. The UK and other countries of origin must take responsibility for their citizens inside north-east Syria,” she added.

The birth of Jarrah, Ms Begum said she did not regret travelling to Syria – although she added that she did not agree with everything the IS group had done.
● “I just want forgiveness really, from the UK,”