Theories of the State: Feminist 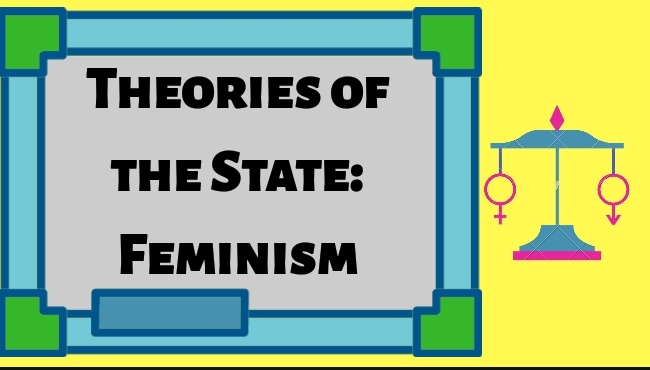 Feminist theory is about equality for women and men. Though all feminists struggle for gender impartiality, there are many ways to approach this theory, including socialist feminism, liberal feminism, and radical feminism.

Feminist theory is the expansion of feminism into the theoretical, philosophical, or fictional discourse. Feminist theory aims to understand the true nature of gender inequality. It scrutinizes women’s social roles, experience, interests, chores, and feminist politics in various fields, such as anthropology and sociology, communication, psychoanalysis, home economics, literature, education, and philosophy.

Many scholars proclaimed that feminism is the faith that women should have equal rights to men. As a result, the feminist movement battles for equal rights and opportunities for women.

There are several types of feminism and feminists themselves tend to disagree about how women are deprived and which action should be taken to get equal rights. For example, ‘social feminists’ believe that women are exploited by the capitalist system both at work and at home.

Both females and males who categorize themselves as feminists disagree on many things. That being said, Most feminists agree on the following basic principles:

Increase Equality: Feminist thought links ideas to action insisting, we should push for change toward gender equality and not just talk about it.

Expanding Human Choice: Feminists believe that both men and women should have the freedom to develop their human interests and talents, even if those talents and interests conflict with the status quo. For example, if a woman wants to be a part of the army and seek to become an officer, she should have the right and opportunity to do so.

Ending sexual violence & promoting sexual freedom: Feminists feel that women should have the choice to control their sexuality and reproduction.

There are three basic forms of feminism:

It is embedded in classic liberal thought and believes that individuals should be free to develop their abilities and follow their interests. This approach visualizes gender inequalities as rooted in the attitudes of our social and cultural institutions. Liberal feminists do not understand women’s equality as requiring a reorganization of society, but they do seek to expand the rights and opportunities of women.

They focus mostly to protect equal opportunities and participation for women through legislation. Passage of the Equal Rights Amendment in 1972 was a major step forward for the liberal feminist program, which in part states that “Equality of rights under the law shall not be abridged by the United States or by any State on account of sex.” Reports indicated that in the US, 35 states have ratified the amendment; 38 are needed for it to become part of the U.S. Constitution. The 15 states that have not ratified the Equal Rights Amendment include those in the Deep South, Midwest, and Southwest and include Florida, Missouri, and Nevada.

Socialist feminists accepted the ideologies of radical feminists that gender roles need to be abolished. But they visualized gender and sexuality as social constructs both capable of transformation. While they recognize that biology does play a role in determining personality, anatomy does not confine or limit our capabilities as human beings on an emotional or a physical level.

It is established in reports that socialist feminists agree that liberal feminism does not appreciate the depth of the oppression of women and only addresses the situation of women of the upper and upper-middle classes. They also agree that women have been oppressed in almost all known societies, but the nature of this repression has differed because of the different economic realities.

Socialist feminists do not contemplate that the oppression of women is based solely on the economic system, and they recommend that patriarchy and capitalism are combined into one system. They consider that we must understand the continuing effects that colonization, imperialism, and racism have on the women of the world.

Socialist feminists inferred that it is incorrect to propose that any one form of oppression is the most important form of oppression. Instead, they identify that oppression based on sex/gender, class, race, and sexual orientation are all interwoven. To effectively challenge any one of these forms of oppression, it is required to well understand and challenge all of them.

Socialist feminists accentuate the economic, social, and cultural importance of women as people who give birth, socialize children, care for the sick, and provide the emotional labor that creates the area of the home as a retreat for men from the realities of the workplace and the public arena. Socialist feminists viewed this as important labor that is ignored and denigrated. They are concerned with the reality of what Arlie Hochschild calls the “second shift.”

Socialist feminists highlight that within the workplace, women face challenges of job market segregation, lower wages for the same work, and sexual harassment. They also identify that the labor movement has been complicit in maintaining this.

Radical feminists seek to abolish patriarchy by challenging existing traditional social norms and institutions, rather than through a purely political process. This includes challenging the concept of traditional gender roles, opposing the sexual objectification of women, and raising public mindfulness about such issues as rape and violence against women.

Feminist political theory is a progressive field in political science that mainly focuses on gender and feminist topics within the state, institutions, and policies. It raises concern on the “modern political theory, dominated by universalistic liberalist thought, which claims indifference to gender or other identity differences and has therefore taken its time to open up to such concerns” (Veronique Mottier, 2010).

⚫To understand and critique the role of gender in how political theory is conventionally construed.

Undeniably, researchers stated that, insofar as almost all versions of feminism involve “demonstrating how politics, understood as power relations, is present in our everyday lives,” one could reasonably “describe the feminist theory as a whole as a kind of political philosophy distinguishing factor of feminist political theory from feminism broadly is the specific scrutiny of the state and its role in the reproduction or redressing of gender inequality.

In addition to being broad and multidisciplinary, the field is comparatively new, inherently innovative, and still expanding. It is described by theorists that “feminist political philosophy serves as a field for developing new ideas, practices, and justifications for how political institutions and practices should be organized and reconstructed.”

Feminist researchers have also examined the internally inconsistent and disciplinary apparatuses of welfare policies. Across various regions, feminists are challenging both the paring down of the state’s welfare responsibilities and the intensification of security functions in post-9/11 geopolitical coalitions.

It has been well documented in the literature that within feminist theory, states occupy an aggravated space. Whereas states have often supported feminist objectives, states are also the locus of many of the problems that occupy feminists, such as militarism, moral regulation, and the cheapening of women’s labor.

Despite the feminist normative opposition to views from nowhere in particular that purport to be relevant everywhere, feminist state theory has played its key discussions with the little specification of state contexts. Geographic coordinates and national histories remain largely undescribed in classics within the field of feminist state theory (Carole Pateman, 1988).

It has been emphasized in the literature that, dissimilar to more disciplined and conventional versions of state theory dominated by political science and legal studies, feminist state theories focused on other areas such as literary studies, anthropology, queer theory, development studies, history, and sociology.

Many contributors such as Rajeswari Sunder Rajan (R.S Ranjan) and Youme Park, are literary theorists who have written about states and imperialism. Hagar Kotef, involved in the field of political philosophy, has written about urgent issues such as Israel’s occupation.

Margaret Little is an academician in political studies and women’s studies and an anti-poverty activist, while Lynne Marks is a historian fascinated by issues related to gender history and the social history of religion. Each theorist has greatly contributed to innovative feminist writings with states, steering clear of rigid assumed teleology whether it is the state as a liberating force or as a coercive and co-opting force.

In the debate, Sunder Rajan and Sen argued strongly against philosophical purism, articulating modes of engagement that are cautious of the dangers of governance feminism while also being attentive to the redistributive potentialities of state power. Little’s article contradicts unitary notions of the state and indicated important subnational regional differences concerning Canada.

Sunder Rajan’s article defines the political insufficiencies of the mourning figure as the locus of feminist opposition to the state and argues instead for a more robust agonistic approach to state politics that accounts for many female subjects and political outcomes. Park critiques the use of “shame” as the framing device for understanding the history of comfort women, calling rather for an emphasis on injury and its attendant redressals.

Kotef perceived that the targeting of women and children in Gaza in 2008–09 signaled a shift in the moral economies governing security. The gendered formulation of women’s role in war and peacemaking is being reconfigured as states such as Israel and Sri Lanka target civilians with impunity.

To conclude, Feminism is the planned movement that encourages egalitarianism for men and women in political, economic, and social areas. In vast literature, it is documented that Feminist theory is an extension of the general movement to empower women around the globe. Feminism can be elaborated as a recognition and critique of male supremacy combined with effort to change it. It is well established that feminist combats for the equality of women and argue that women should share equally in society’s opportunities and scare resources. Feminists consider that women are harassed due to their sex based on the prevailing belief of patriarchy. Removal of patriarchy will result in liberty for women