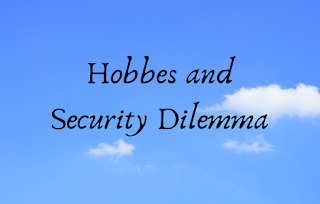 Thomas Hobbes always thinks we can also be a political intellectual if we imagine men and women living in a ‘natural’ condition before the institution of the sovereign state.

According to hobbes before the formation of state man and women were living in a condition of stateless society with the no governing authority to regulate the activities of the peoples. This situation was named by him as a “state of nature”.

Since then there was no regulating authority over the people. There was a widely prevalent situation of anarchy; every individual works only for their self-interest and if necessary than can go every possible extent to maintain their interests and the security as well.

For Hobbes, the “state of nature” is an extremely adverse human circumstance in which there is a permanent ‘state of war’ of every man against every man in their natural condition. every man, woman, and child is endangered by everybody present in a particular circumstance, life is constantly at risk, and nobody can be confident about his or her security and survival for any reasonable length of time. In these circumstances, peoples always have a constant fear of death.

Hobbes characterizes that pro-civil condition. It is not only desirable but also extremely urgent to escape from those intolerable circumstances at the earliest moment if that is possible.

Hobbes believes there is an escape route from the state of nature into a civilized human condition, and that is via the creation and maintenance of a sovereign state. The means of escape is by men and women turning their fear of each other into rational collaboration with each other to form a Security pact that can guarantee each other’s safety.

Men and women paradoxically cooperate politically because of their fear of being hurt or killed by their neighbors they are ‘civilized by fear of death’. Their mutual fear and insecurity drive them away from their natural condition the war of all against all.

In other words, they are driven to institute a sovereign state not by their reason (intelligence) but, rather, by their passion (emotion). Their intelligence alone is not sufficient to propel such action. We must have the value of peace and order firmly in mind. So they will willingly and jointly collaborate to create a state with a sovereign government that possesses absolute authority and credible power to protect every humankind in society, who have a constant fear of death from both internal disorders or problems and foreign enemies or external threats.

In this prevailing situation of war against everyone. No state in this situation wants to lose his sovereignty before foreign enemies and this state always seeks to maintain the position of status quo.

In the civil condition, the peace and order under the protection of the state, men, and women have an opportunity to flourish in relative safety. They no longer live under the constant threat of injury and fear of death. Being secure and at peace, they are now free to prosper. As Hobbes puts it, they can pursue and enjoy ‘felicity’, i.e., happiness and well-being.

However, that statist solution to the problem of the natural condition of humankind automatically posses a serious political problem. A peaceful and civilized life can only be enjoyed within a state and it cannot extend beyond the state or exist between states.

The before every act of instituting a sovereign state escape from the fearful state of nature among individual people simultaneously creates another state of nature between states. That poses what is usually referred to as ‘the security dilemma’ in world politics.

The achievement of personal security and domestic security through the creation of a state is necessarily accompanied by the condition of national and international insecurity that is rooted in the Anarchy of the state system.

The main point about the international state of nature is that it is a condition of the actual or potential war there can be no permanent or guaranteed peace between sovereign states, no international peace. But there can be domestic peace within the framework of the sovereign state and the opportunities that only civil peace can provide for men and women to enjoy felicity.

Classical Realists described that “the state is formed or organized and equipped for war to provide peace to its subjects or citizens.”

International peace is an unrealizable dream and dangerous illusion.

Thus, we can conclude the discussions by briefly stating few common things among Classical Realists —

They agree that the human condition is a condition of insecurity and conflict that must be addressed and dealt with consciously.

They agreed that there is a body of intellectuals in the world. They think the problem of security is major concern before every state and could only be solved by collective efforts of the state by creating an International Organization, supreme authority over the state which supervises, regulate and resolve the conflicts between the states without hampering their sovereignty Like; United Nations (UN) in Modern State.

Although the United Nations, the predecessor of the league of the nation which was formed around in 1919 has failed to stop World War I and World War II but we also cannot deny its several efforts toward conflict resolution between the countries.

Finally, they agree that there is no final escape from this human condition “state of nature”, which is a permanent feature of human life.

In other words, although there is a body of political wisdom which can be identified and stated in the form of political maxims. There are no permanent or final solutions to the problems of politics including international politics. There can be no enduring peace between states. This pessimistic and unhopeful view is at the heart of the International Relations theory of the leading classical realist of the twentieth century, Hans J. Morgenthau.

We have one Perfect example of security Dilemma as given by the Hobbes. we might all well know heard there was the situation of a cold war between two rival countries; the United States and the Soviet Union (Now; Russia) Immediate after World War ll. They were two extremes of different Ideology and the whole world during this period has been divided between two Parts: Western and Eastern. The whole Western world completely based on Capitalist Ideology whereas the Eastern world relies upon the Socialist Ideology.

These two Countries were major Power Blocs of his era and there was the situation of Arms race between the countries. If one Country Posses nuclear capability to deter the security of other states than other countries too Posses that Level of Power to deter his enemy State.

But during whole this period of power politics there was a situation of balance. Because everyone knows If the war Occurs than there will be mass destruction between the countries and no one wants to possess this kind of situation.