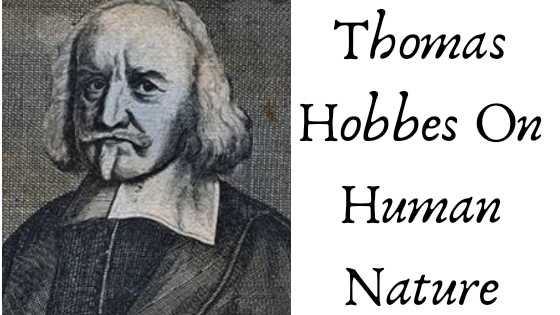 Contrary to Aristotle and the medieval thinkers, who saw human nature as innately social, Thomas Hobbes viewed human beings as isolated, egoistic, self-intrested, and seeking society as a means to their ends.

Individuals were creatures of desire, seeking pleasure and avoiding pain. Pleasures were good and pain bad, which was why men sought to pursue and maximize their pleasures and avoid pain.

In addition to being creatures of pleasure and pain, Hobbes saw individuals constantly in motion to satisfy their desires.

Continual success in the attainment and fulfilment of their desires was called “felicity”, a condition of movement and not rest.
Appetites were insatiable, for the satisfaction of some gave rise to others.
Hobbes asserted that every human action, feeling and thought was ultimately physically determined. Though the human being was dependent on his life, on the motion of his body, he was able, to some extent, to control these motions and make his life.
This he did by “natural” means, i.e. by relying partly on natural passions and partly on reason.
It was reason, according to Hobbes, that distinguished humans from animals. He drew a distinction between “prudence”, which was the accumulation of experience, and “reason” seen essentially in mathematical terms.
Reason therefore enabled the individual to understand the impressions that sense organs picked up from the external world, and also indicated an awareness of one’s natural passions.
Hobbes also introduced, interestingly, the need for an “arbitrator” or “judge” who resolved rational, disagreements since no one individual’s reason was necessarily “right”, so parties to a dispute needed an arbitrator “to whose sentence they will both stand”. This remained a major theme in the entire theoretical construct of Hobbes, that order was absolutely necessary and an indispensable precondition for getting anywhere with human reason, of being able to build any sort of culture.
Hobbes did not exclude the possibility of altruism, listing benevolence, goodwill and charity among passions. Good and evil were names that signified an individual’s appetite and aversions. The objects of an individual’s desires varied in accordance with his personal characteristics, but all—at least ordinarily—desired self-preservation. Peace enhanced the possibilities of preserving ourselves, so it was good.
The “appetites” and “aversions” were basically passions. The aim of the individual dictated by passion was to obtain desired results.
Hobbes mentioned a long list of passions, but the special emphasis was on fear, in particular the fear of death, and on the universal and perfectly justified for quest of power.
Since individuals would like to do their own thing, pursue their own desires, there was no ultimate human good as a criterion of ethical judgement.
Hobbes contended that life was nothing but a perpetual and relentless desire and pursuit of power, a prerequisite for felicity.
Consequently, individuals were averse to death, especially accidental death, for it
Ultimately Hobbes conception of human nature as he presents was egoistic, isolated and self- intrested that is the only reason he advocated for an strong or stable government. In other words an absolute monarch.
Hobbes thinks about an absolute sovereign state where no individual can challenge the authority of the state in exception of threat of life.
Satisfaction therefore was a temporary feeling, for individuals were aware of the recurrence of desires. Not only did individuals ensure the means for present satisfaction, but they also provided for future ones.
marked the end of attainment of all felicity. Power was sought for it represented a means of acquiring those things that made life worthwhile and contented, called felicity.
Post Views: 11