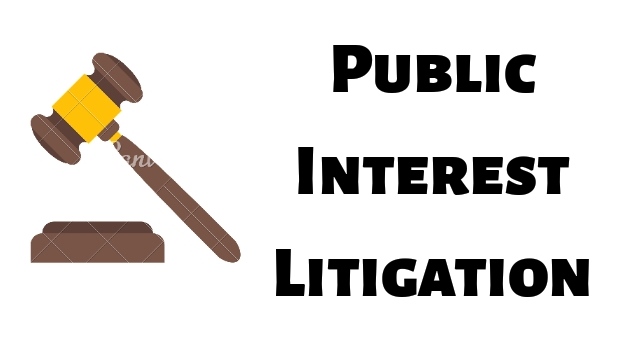 Public Interest Litigation is defined as “a legal action initiated in a court of law for the enforcement of public interest or general interest in which the public or a class of the community has pecuniary or some other interest to which its legal rights or liabilities are affected.”

Dispensing justice without the requirement of the person affected knocking the doors of the court. Any person can move the court for securing relief to the poor and deprived section of society for securing their interest. Even a judge can initiate suo moto proceedings after reading newspaper reports or otherwise.
The Supreme Court in Peoples Union for Democratic Rights vs Union of India permitted Public Interest Litigation at the instance of “Public spirited citizens” for the enforcement of constitutional & legal rights of any person or group of persons who because of their socially or economically disadvantaged position are unable to approach the court for relief.
An aggrieved person can approach the Supreme Court by filing Writ Petition under Article 32 of the Constitution and similarly, an aggrieved person can also approach the High Court under Article 226 of the Constitution.
Public Interest Litigation (PIL)
“Law without justice is wound without care.”

To secure access to justice for common people, and underprivileged masses like Bonded Labour, victims of environmental pollution.
Rejecting the laissez-faire notion of the traditional justice system, that the effected party only has the right to claim compensation.
To make the judicial process more democratic through awareness, assertiveness, and resources for judicial redressal.

Categories that will be entertained as Public Interest Litigation (PIL)

The person who approaches the Court does not need to pay huge court fees.
The court can focus on larger public interests involving issues related to human rights, environment, and consumer welfare.
When the executive is not performing its duties properly, the judiciary can haul them up.
Provides check and balance against arbitrary and mala fide use of executive discretion.
A court can appoint a commission to investigate matters where the petitioner/ aggrieved party is socially or economically weak and unable to reach the doors of justice. Hence it provides legal representation to unrepresented voices.
Poor and exploited people can obtain justice because of radical changes and alterations made in locus standi requirements.

It became an instrument of harassing innocents because of frivolous cases that can be filed at nominal fee charges.
Relaxation in locus standi requirements has caused privately motivated interests to pose as public interests.
Criticism against the judiciary, for judicial overreach and passing of orders that are unable to be implemented effectively.
Delayed justice because of the addition of frivolous PIL to already overburdened judiciary.
Abuse by political pressure groups, NGOs influenced by external interests, etc. blocking the developmental process.

Rampant misuse of PIL than its genuine use has generated suspicion in the disguise of so-called public interests. Recently PIL has taken the shape of Political Interest Litigation.
Delay in legitimate administrative actions for obtaining political gain by some political pressure groups.
No clear way to find out vested aims and interests.
Still, many people are unaware of the mechanism and procedure to file it, limiting its utility.

Hussainara Khatoon vs. the State of Bihar:

It is considered the first case of PIL in India. It was filed by various prisoners of Bihar jail. Supreme court bench headed by Justice P.N.Bhagwati upheld that prisoners should have access to free legal aid and fast hearing.

People’s Union for Democratic Rights vs. Union of India:

The Supreme court held that a third party could seek intervention directly through a letter or other means in case another party’s fundamental rights are violated.

DC Wadhwa vs. the State of Bihar:

The petition was filed by a professor of political science to ensure proper implementation of Constitutional provision. He challenged the practice of re-promulgation of ordinances without getting it passed by the legislature.

PIL was filed to prevent Ganga water pollution. Supreme Court, in this case, recognized the right to a healthy environment as a fundamental right under Article 21.

Shreya Singhal vs. Union of India:

This was a landmark case for freedom of speech. Supreme Court quashed section 66A which had some arbitrary provision acting against free speech.

The court needs to keep in mind that under the guise of redressing grievances, PIL does not breach the separation of power principle set under the Indian Constitution.
Courts must see PIL s under the scanner of skepticism since PIL has of late become Political Interest Litigation.
The court should try to introduce a mechanism of punishing those who abuse the power given by PIL.
The long-pending decisions should not hinder the development process or be responsible for red-tapism.
The fast-tracking mechanism should be availed for pending Private Interest Litigations.

PIL has played a key role in bringing social change in the last decade. It is an institutional innovation for the welfare of society, especially considering the weaker section of the society.
Looking at changing needs of the time, PIL machinery is undergoing reconstruction or rethinking for development prospects so that deserving people should be awarded justice and those who misuse should be punished.
Post Views: 10